The workshop included two presentations, as well as an open discussion on bystander behavior.

The Stamp Out Aggression campaign was launched by SGA last November to address sexual assault, educate students and promote available resources on campus. The initiative included an ongoing social media campaign that connects students to infographics and tools such as SafeRide and the Guarded app.

JCPenney in the Mt. Pleasant Shopping Center to close 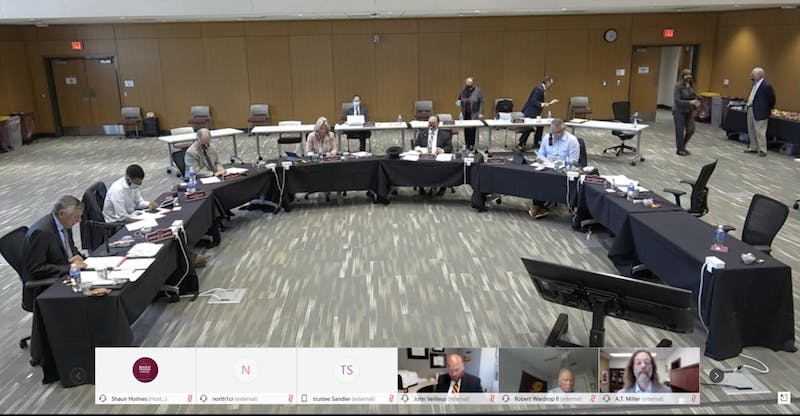 “The more shares we got, the more we saw our resources were widespread, and that’s reaching new students who maybe wouldn’t go to an event like this,” Murray said. "I saw people commenting, engaging and even if they just ‘like’ it, they’re involved in the picture.”

The Jan. 29 bystander behavior workshop was a continuation of the campaign, centered around how not to be a bystander in a potentially dangerous situation.

Office of Civil Rights and Institutional Equity Assistant Coordinator Rebecca Detroyer gave a presentation, opening with some background on the CMU sexual misconduct policy and national statistics on sexual assault. However, before discussing bystander intervention, she emphasized safety as the main priority in every situation.

“You need to ask a couple of questions before you’re going to become an empowered bystander: how can I keep myself safe in this situation, what options are available to me and who else might be able to assist me,” Detroyer said. “I encourage and implore you to think about safety because it’s important for both you and the other individuals involved in the situation.”

As part of her presentation, Detroyer listed four intervention strategies that bystanders can employ: distract (interrupt the situation), direct (intervene directly), delegate (recruit others) and delay (evaluate the options).

“Bystander behavior is important to address because of the culture we have here at CMU, and we have a take-care ideology,” Destroyer said. “I personally think our office is doing great work on campus. We’re working to help with all sorts of issues, and we have great students organizations who are working to spread awareness and stamp out aggression.”

During the workshop, Emmons Residence Hall Director Drew Mason also presented on the components of rape culture before opening the floor to SGA Vice President Lyndi Rose and Diversity Chair Brett Houle to lead a discussion on why people don’t interfere when they should and how to combat inaction.

“I feel that people are scared,” said Midland freshman Jackie Anaele. “I know you shouldn’t be, but people don’t want to get involved in a situation, they kind of want to watch and see who steps up first.”

With ongoing inclement weather, about 15 students attended the meeting, which included SGA members and SAPAs.

“Even though we didn’t get a lot of people who turned out coming from their halls, the campus leaders who were here know more and can do more to help educate others,” SGA President Jake Hendricks said.

The next installment of the Stamp Out Aggression campaign will start Feb. 1 and involves SGA members tabling around campus throughout the month of February. The goal is to collect 500 signatures of students pledging against sexual aggression.

“I’m excited to kick off our pledge to get students involved in education and stand up and say that (sexual aggression) is not allowed on CMU’s campus,” Murray said. “It’s not just about getting signatures, it’s about getting students to understand where they can turn to and why they are taking the pledge. It’s an active role, not a passive voice.”

Other SGA projects include promoting and partnering with SAPA. More information on these projects will come at a later date.

“I think it was important for SGA to do something about (sexual assault) and bring up the discussion,” Hendricks said. “I hope the discussion we’re starting now continues.”