Central Michigan gymnastics led the Illinois State Redbirds by almost a full point after the first rotation and never relinquished the lead after that.

By Evan Petzold | 58 minutes ago 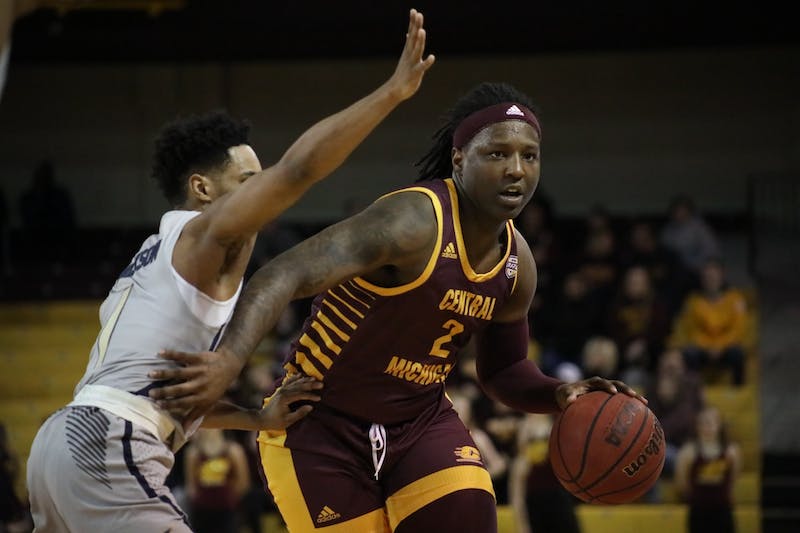 "In the gym we worked hard on that half-tenth better," said junior Denelle Pedrick, who was named Mid-American Conference gymnast of the week on Tuesday. "It showed up, we improved to that 195 which was our goal for this meet. Next meet it will be the same thing, half-tenth better."

Freshman Kennedy Johnson and sophomore Sierra Demarinis led the Chippewas on the vault in their first rotation, each scoring 9.750. Sydney Williams, a junior, had a strong showing with a 9.725 as did freshman Morgan Tong. Senior Gianna Plaksa added a 9.675 to give the Chippewas a team score of 48.625.

Illinois State opened the meet on the uneven bars, as it took a team score of 47.700 with a pair of 9.600 scores from Mia Quigg and Kylie Meyer.

The gap in the meet would only widen with each rotation.

In the second rotation, the teams switched events. The Chippewas on the uneven bars and the Redbirds had their turn on the vault.

Plaksa posted a 9.800 to lead the Chippewas, her strong routine was capped off with a strong landing to give her the win in the individual event. Senior Abbie Zoeller followed close behind with a 9.775 then Pedrick and junior Hayley Porter each scored a 9.750.

For the penultimate rotation, Central Michigan hit the balance beam, one of their weaknesses, and the Redbirds took to the floor.

The Chippewas were strong on the beam, it was their second-best team event of the meet with a team score of 48.800. Senior Skyler Memmel led the way with a 9.800, Tong and senior Macey Hilliker followed with a 9.775, Plaksa and Pedrick each scored a 9.725. Memmel, Tong and Hilliker took first, second and third, respectively in the individual event.

Memmel, only competing on the beam the last two meets, scored a 9.725 her last time out.

"I'm very happy with my performance tonight," Memmel said. "Last week I was a little bit anxious so I got in the gym, worked hard, and I felt a lot better about my performance."

After three rotations, Central Michigan had a commanding 146.175-142.255 lead over Illinois State.

This season, the Chippewas usually have had to come from behind and win in the final rotation. This was not the case on Friday.

"We try not to let the numbers dictate what's in our heads," coach Jerry Reighard said. "After beam, I got them together and said, 'you got to fight, that's what this is all about, just fight until the end and things will be great.'"

In the fourth and final rotation, the Chippewas took to their strongest event, the floor exercise, while the Redbirds went to the balance beam.

Plaksa, who won the all-around competition, posted a 9.850 as did sophomore Nora Fettinger to lead Central Michigan. Zoeller scored a 9.825, Williams posted a 9.800 and Demarinis rounded out the team with a 9.775 posting for a team score of 49.100.

"My worst fear is that this team doesn't know how good it could be," Reighard said. "I told the team, you're not going to bump into success, it's not just going to come up and tap you on the shoulder and say, 'you're ready.' Success happens when you prove it in action."

The Chippewas will be on the road for over a month to prove they're ready for success. They will travel to Denver on Jan. 19 for a quad against Denver, Texas and Sacramento State.