CMU (13-2-3, 5-2-3 MAC) faced a second loss on Sunday against Buffalo, but senior midfielder Eliza Van de Kerkhove scored in the 90th minute to tie the game 1-1. The match ended in a 1-1 tie after two overtime periods.

Seven of the team's last eight games have gone to an overtime period.

By Ashley Birkeness | 11 hours ago

By Megan Youngblood | 11 hours ago

The Chippewas remain in second place in the MAC West Division behind Ball State (13-3-2, 8-1-1 MAC). With only one regular season game remaining, CMU is unable to win the division. 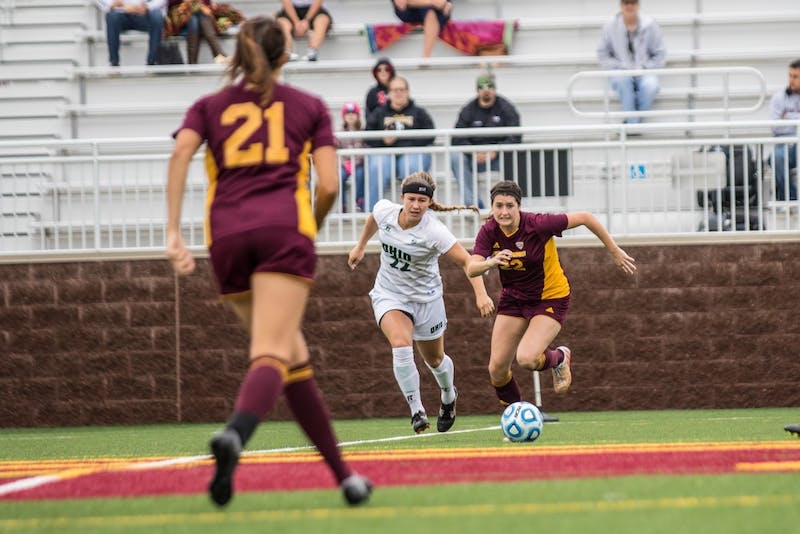 Soccer scores in final minute of regulation to tie with Buffalo

Coming into Thursday's game, Akron had not won a single game in conference play. The Zips earned their first MAC win, finding a way to comeback and upset the Chippewas and end their chances of winning the division title.

CMU had a 2-0 lead with just five minutes remaining when the Zips scored to cut the lead in half. It didn't take much longer for the momentum to shift in Akron’s favor.

With less than a minute remaining in regulation, Akron’s Kiana Zuk scored to tie the game 2-2 and send it to overtime.

After a scoreless first overtime period, the Zips concluded their comeback with an exclamation point. Akron's Julia Crowe booted a shot from 30 yards out and found the back of the net, beating the Chippewas 3-2.

Both of Central Michigan’s goals came from junior forward Samantha Maher. Her first goal came on a free-kick in the 31st minute. Her second goal came from the right side of the box in the 74th minute.

Maher credited the Zips on working all match long to earn the hard fought win — their first of the season.

“(Akron) brought a lot of energy in those last few minutes before overtime," Maher said. "They really kept us on our toes. I thought we were matching that and I thought we did pretty good, too. They really worked to get their goals.”

Following the game, head coach Peter McGahey said he was confident his team would find a way to respond to the loss.

“This is a very resilient group," he said. "It's a group that has very good leadership and I am confident they will bounce back. In terms of how (the loss) transpired — it's certainly a punch in the gut for sure.”

On Sunday, both Central Michigan and Buffalo had trouble finding offensive production for most of the match. The two teams managed to record just two shots on goal during the first half.

After Buffalo’s only goal came in the 56th minute off the foot of sophomore forward Carissima Cutrona, the Chippewas appeared to be heading for their first losing streak of the season.

Van de Kerkhove had other ideas.

With just 15 seconds remaining in regulation, sophomore forward Alexis Pelafas pushed the ball up field and found an open Van de Kerkhove crashing toward the net. Van de Kerkhove scored to tie the game at 1-1.

The match then proceeded to go into double overtime before ending in the tie.

McGahey said he was very happy to see his team’s effort finally pay off in a game that was filled with emotions.

“I am very proud of the team’s effort all day. They had to respond to a lot of emotion,” McGahey said. “It was their senior day here in Buffalo and we had to respond to that emotion all day long. It felt great to finally get rewarded for all of our offensive pressure in the last seven to eight minutes.”

Van de Kerkhove said she was proud of how her team played Sunday.

“Everyone was positive throughout the game and wasn't just playing for themselves.” she said. “We were just more concerned with trying to keep competing together. Games like this one don't necessarily give you the result you want but it gives us a lot of confidence going forward.”

CMU’s final game of the regular season is on Thursday against Eastern Michigan in Ypsilanti. Kickoff is scheduled for 3 p.m.