This Week, it's Personal

This year, members of the Greek community chose to honor the memory of a sister during Greek Week 2017

After Kristy Malter died on July 14, 2016, her sorority sisters at Alpha Gamma Delta wanted to do everything they could to honor her and to help her family.

Malter was about to enter her final year at Central Michigan University when she became ill from bacterial meningitis. Within 48 hours of her illness, her brain had lost all functioning, her father, Tim Malter, described.

Donna Malter, Kristy’s mother, said her decline happened so quickly, there was no time to register what was happening.

Members of Alpha Gamma Delta were going to the Faster Horses Music Festival that week. When they received a message from Malter stating she was missing the festival because she was sick, none of them thought it would be last time they would hear from her.

“There was a lot of confusion,” said Sault Ste. Marie junior Shelby Mackie. “None of us knew what (bacterial meningitis) even was, or how serious it was.” 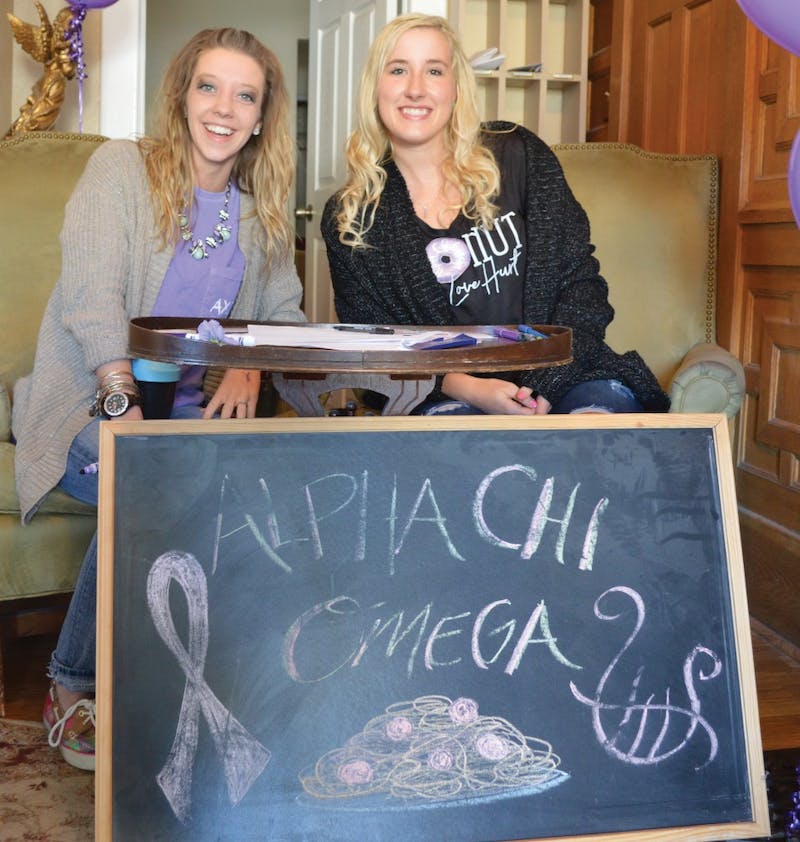 Most college campuses host an annual Greek Week, but Max Sarvello of Sigma Pi said CMU’s event is especially fulfilling because of its community and philanthropic based focus.

Kristy died before the festival even began. Most of the Alpha Gamma Delta members still attended to mourn with each other.

The sorority sisters aren’t alone in mourning Malter’s death. Members are using CMU’s 2017 annual Greek Week as an opportunity to pay tribute to their fallen sister.

Dedicated to making a local impact

Every year, the social Greek organizations at CMU come together during Greek Week. They team-up and face off in fundraising competitions while they raise awareness for the same cause. From April 2-7, Greeks voted to use the week to celebrate Kristy and support her family, eight months after her death.

Proceeds from Greek Week will be divided between the Isabella County Child Advocacy Center, a Mount Pleasant-based organization that practices youth-centered casework to protect children in negative environments, and the Kristy Malter Memorial Fund, which will contribute toward paying the Malter family’s medical bills that accumulated during her hospitalization.

For the people to remember (Kristy) with (Greek Week), it’s really what keeps us strong,” Tim Malter said. “Having everyone show their support keeps her alive in our hearts.”

Macomb junior Alexis Carlson, a Greek Week chairwoman and member of Alpha Sigma Tau, said the key component of the week is giving the money raised back to local philanthropies.

“Not only are we raising all of this money and doing great things, but we get to impact the local community around us,” Carlson said.

Members of Alpha Gamma Delta knew they were going to nominate Kristy’s memorial fund as a Greek Week philanthropy since the beginning of the Fall 2016 semester. They knew the idea would gain support because Malter made a positive impact across campus.

Ortonville junior Haley Lauwers, of Alpha Gamma Delta, said Malter was well-known in the community. When they walked together through Mount Pleasant, she’d say hello to everyone she passed, both within and outside the Greek community.

During Greek Week, all 30 social fraternities, sororities and Greek multicultural organizations on campus are randomly paired into 11 teams. Throughout the week, they will compete to raise the most support for the child advocacy center and Malter’s memorial fund.

Most of the activities are not open to public due to space availability, with the exception of Mock Rock, the traditional Greek Week conclusion on April 7 at the McGuirk arena.

Tickets for Mock Rock are $5 and can be purchased from Greek members or at the door. Check-in will be at 5 p.m. and the event will begin at 6 p.m.

While collecting as many donations as possible, the organizations will attend presentations and participate in several activities throughout Greek Week.

Inviting the previous year’s philanthropy to share how Greek Week donations have benefitted the organization is a new event, she explained. Witnessing their direct effect will likely be inspirational to sorority and fraternity members, and Shevnock thinks it will continue as a Greek Week tradition.

Greek members will also attend presentations from representatives of the child advocacy center and United Way, the company the center is a subset of. The sessions will reiterate the main values, goals and practices associated with the organization.

Teams will compete in the Greek Olympic Games on April 4, which Shevnock said involve several rounds of athletic and relay games. They will also participate in a service day to provide help for the child advocacy center on April 5.

“We’ll be decorating bags with gifts for the children who (receive help) through them,” Shevnock said. “Then we’ll be stuffing informational packets for adults (who) communicate with the ICCAC.”

Shevnock said everyone is encouraged to attend the Mock Rock finale, where teams create a song and dance routine during the span of the week.

“They cannot start practicing until the Sunday of Greek Week,” she emphasized.

Every year, the acts are designed to fit the theme chosen by the chairs that year, Shevnock explained. For this year’s “Key Words” theme, each team will choose one word, such as “love,” “wind,” and “fire,” to base its performance around.

Wong stressed the significance of Mock Rock because it’s the biggest Greek Week event open to the public.

“A lot of the Greek activities we do throughout the year (are) always intended to be for the whole community, not just the CMU community, but to impact the Mount Pleasant community,” Wong said. “But sometimes we get away from that. Greek Week really is focused to be super inclusive with the whole community.”

Although Mock Rock is the only official event open to the public, Shevnock said every competing team is encouraged by extra points to host an additional philanthropy event for the public.

Max Sarvello, another chairperson and member of Sigma Pi, said the only monetary goal the chairs set is to raise more funding than the year prior.

“Two years ago, the amount raised was way over the goal that was set,” the Sterling Heights senior said. “It was very impressive what the whole Mount Pleasant community was able to accomplish. So, every year now we’re saying ‘Let’s just beat last year.’”

The Greek community raised significantly more money during Greek Week every year for the past three years. In 2014, $30,000 was donated to Special Olympics Michigan. The Angel Wings Fund received $50,000 in 2015, and $67,500 was raised for the Derrick Nash Strong Foundation last year.

“I think we have the means to surpass the goals from last year,” Sarvello said. “So far, we feel confident.”

Wong added that each Greek Week team has a Givebutter campaign, a crowd funding platform similar to GoFundMe.

On the CMU Greek Week Givebutter page, he said 12 campaigns are available to donate toward: One for each of the 11 teams and a “parent campaign” for those interested in donating but have no team preference.

Anyone can donate to the Greek Week campaigns at givebutter.com/cmu-greek-week.

When Malter’s parents found out the CMU Greek community wanted to contribute to her memorial fund, Tim Malter said they both broke down in tears of joy.

“No one wants to lose a child before themselves,” Tim Malter said. “And on top of that, (while) she was going through her fight, the amount the bills that built up was extreme and having to repay that has been difficult. To find out (Greek Week) will help pay for it, it was such a relief. It makes us feel so much love and support.”

Donna Malter said the support the family is receiving from the CMU community puts a smile on their faces and helps them get through every day.

“It’s amazing how everyone is thinking so much about her and keeping her memories alive,” she said.

Mattawan junior Amanda Short, a member of the Alpha Gamma Delta sorority, was ecstatic when Malter’s representation at Greek Week was announced. She believes it’s the perfect way to honor her.

This especially rings true with the Mock Rock tribute, Alpha Gamma Delta President Malissa Doney explained, because it “embodies who she was as a person.”

“Even after Mock Rock, we would catch her still doing the dances every chance we got,” she said.

Mackie described how raising support for children along with Malter’s parents worked together impeccably for honoring her, because Malter loved helping children.

Short expanded on the sentiment, adding that Malter’s love for children motivated her social work career ambitions and involvement with Lunch Buddies, a child mentoring program at CMU, facilitated by the Volunteer Center.

In Lunch Buddies, college student mentors are paired with elementary school students in the community to eat lunch with every Friday, Short described. This year, Malter would have been a supervisor in the program.

Since Malter’s passing, the Alpha Gamma Delta sorority and the Malter family have remained in close contact and frequently reach out to each other for support. Donna Malter said this relationship has helped the sorority and her family cope.

“It helped the girls because they wanted to be able to talk about Kristy to us and share stories,” Donna Malter said. “It helped us in a way to keep her memory alive. It’s a good feeling. We’re sharing memories with each other and it puts a smile on our face, and it’s healthy for everyone to not keep all of this bottled up.”

Alpha Gamma Delta members all described Kristy as a “genuine” and “selfless” person who always strove to help others.

Doney said she had a tendency to “come to the rescue” and make herself available for whatever her friends and loved ones needed.

“She kind of had a radar for people,” Doney said. “She always knew when something was wrong, you wouldn’t even (have to) see her and she knew.”

Malter’s passion for care-taking continued even after her death. Donna Malter said Kristy was an organ donor, and now three people are living healthily because she could give a final contribution to others.

In her death, Malter continued to benefit Alpha Gamma Delta, as her memory brought the sorority closer together, Short said.

Malter’s memory also impacts new recruits joining the sorority, Shorts explained. They see how close and supportive Alpha Gamma Delta is and how severely the loss of a sister affected them.

Now, they prioritize reaching out to sorority members they weren’t as close to before.

Quinn Kirby was a contributing author for this story.