In Summer 2017, three entrepreneurs decided they wanted to create an impactful and positive business for Mount Pleasant and the result was a glazed doughnut company.

Ignite Donuts, a student-run food cart will kick off its operations on Sept. 13. The cart will be open from 9 p.m. to 2 a.m. every Thursday in downtown Mount Pleasant. 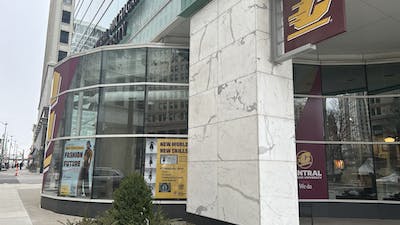 "We are all very ambitious people," Croad, of Novi, said. "We want to make a difference in any community that we put ourselves into and we think Ignite Donuts will deliver that positive impact."

Doughnuts and doughnut holes, ranging in flavors like maple, vanilla, honey glazed and chocolate ganache, will be available for purchase, and Croad hopes they will eventually offer hazelnut, apple and cinnamon as well.

The three founders are a trio of "very hype people" who aspire to bring smiles with their LED lighted doughnut cart, Croad said.

"We purchased (the) food cart and currently our goals are to run it up and down the streets of downtown (Mount Pleasant)," said Muntz, of Taylor. "Eventually we hope to just grow it from there (and) see where it takes us."

After participating in the spring 2018 New Venture Competition, a CMU workshop conference for start-up businesses, the Ignite founders realized the potential of their doughnut endeavor.

But before becoming an official business, the three gentlemen had to learn how to make doughnuts.

Ignite Donuts began as a trial and error process of baking up doughnuts in the residential kitchenettes of Trout and Kessler Residence Halls.

Croad used assistance from Youtube tutorials and books such as "The Food Lab: Better Home Cooking Through Science." He also investigated the cooking techniques used in France and Southeast Asia.

He describes the final product as a combination of a French brioche doughnut with the mouth-watering practices of Asian baking, making for a doughnut with a "soft (and tender) interior and a crispy exterior."

"We want to be able to show people what we offer through our doughnuts and we want people to know how good a fresh doughnut actually tastes," Croad said.

The name, Ignite Donuts, sprouts from a list of more than 100 space synonyms.

"Originally we wanted to cater to college students who may be under the influence late at night and want something to munch on," Croad said. "The word 'Ignite' originates from space."

Although space is no longer the primary theme of their business, Croad hopes for students to take a bite of their doughnuts and look up to the stars.

"This is just stepping stones. We don't know where this is going to take us, but hopefully we will achieve our goals," Muntz said, still curious as to what the future has in store for this downtown doughnut cart.