Photojournalism professor Kent Miller watched as one-by-one his students connected to the Zoom call. What was intended to be a typical weekly class period, turned into a deeper discussion about the historic flooding that occurred this summer in the Great Lakes Bay region.

In a normal semester, JRN 422 is held on the fourth floor of Moore Hall where students can gather around tables to critique each other's photo projects. On Sept. 30, from their living rooms, kitchens and bedrooms, 19 students unified around one goal -- to share stories of the families, many of which feel they are being neglected.

"It was the student's desire to bring awareness to the suffering that was still happening. In a sense (the students) thought (the residents) were forgotten." Miller said. "Our goal was to create a project that gets into the minds and the hearts of people." 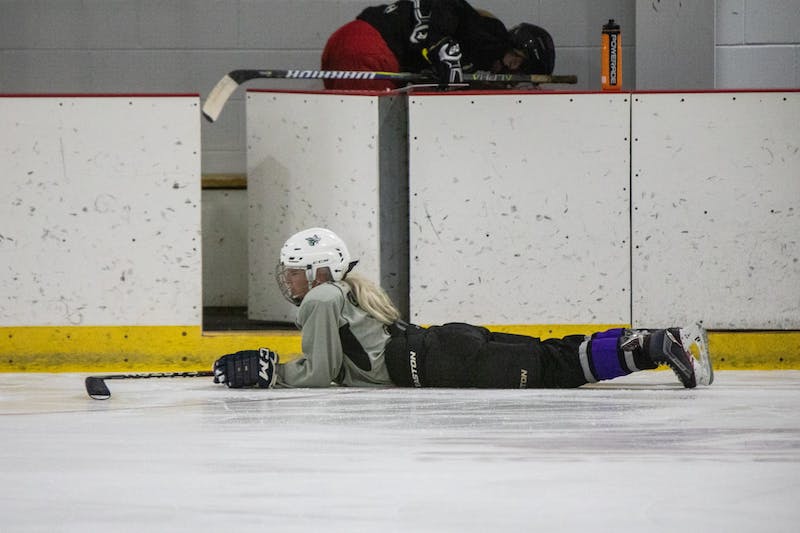 In the weeks following that class discussion, the student journalists spent hours documenting the lives of people impacted by flooding in Edenville, Midland, Sanford, Beaverton and Hope. They also created a website where their work could be viewed by a larger audience than just the CMU community.

Alaska senior Keara Chaperon, who took a leadership role in the project, said the ultimate goal was to work together to show the long-term effect the floods had on Midland and Gladwin County residents.

"It was a class effort to bring this project together," Chaperon said. "We had web designers, social media people, graphic designers ... it was everyone in the class that brought their heart into this project."

Chaperon said the hardest part of the project was working through COVID-19 health and safety guidelines to get connected with sources. On top of that, the students had to travel back and forth from the Midland area to shoot photos and videos.

Miller said he is proud of his students and that he believes their visual storytelling has the potential to make a difference.

"I think journalism is an amazing way of communicating things like this that can bring people together to help," Miller said. "I'd love to get this in front of a congressman, senators, any kind of officials that may be able to help as well."

The entire project can be viewed at cmugivesadamjrn422.wixsite.com/floodproject.

WHAT HAPPENED IN MIDLAND

The days prior to May 19 consisted of heavy rainfall in Michigan's lower peninsula. That rain eventually pushed the Tittabawassee River beyond its limits.

Midland Daily News reporter Mitchell Kukulka was getting ready for bed at about 12:30 a.m. when a notification on his phone went off like an alarm – it was the first of many alerts from the Midland County Sheriff’s office. The message urged residents in Edenvile Township and those that lived near Sanford and Wixom lakes to leave their homes.

Kukulka didn’t sleep that night. He published the newspaper's first update. An hour later he was at the shelter set up in Meridian High School interviewing displaced residents.

Later that day, Kukulka received word he'd need to evacuate from his apartment.

He spent the next 72 hours at his editor's house, working the phones almost non-stop.

“It was more nose to the grindstone. Constantly reaching out to the county and the emergency teams that they set up. I was calling them pretty much every hour or two hours just to get updates," Kukulka said.

By the end of that first day of flooding, Gov. Gretchen Whitmer declared a state of emergency for the city of Midland and Midland County due to severe flooding - eventually expanding that designation to neighboring counties.

More than one-hundred 100 soldiers from the National Guard stationed in the Bay region began restoration missions in the area.

Midland embarked on a long road to recovery. Work remains to be done to this day.

Damage assessments rolled out over the following weeks. Damage to some of Midland's gems such as the Tridge, Dalia Hill and the Chippewa Nature Center was minor. However, sites like the historic county courthouse and homes near Sturgeon Creek suffered serious damage. The city of Sanford and much of South Gladwin County were devastated.

Support for the Midland area came quickly. Donations poured in from people and businesses across the country. In 10 days, United Way of Midland County’s Rise Together Fund raised about $2.2 million.

Before Midland even came out of the flood response stage, local and national media outlets were asking, "how could this happen?"

The Midland Daily News began publishing its "Troubled Waters" series on May 30. The stories examined the history of Boyce Hydro, the owner of the dams, along with the numerous lawsuits they faced in the weeks following the floods.

The Edenvile dam, built in 1924, had not received any substantial construction since it was built, Kukulka explained. The lack of upkeep was a concern for decades. It prompted the Four Lakes Task Force to form in 2018 in conjunction with Midland and Gladwin counties. The goal of the group was to relinquish the private ownership of the dams before something catastrophic happened.

In June, Midland County officials assessed more than $175 million in damage from the floods.

While federal relief was deployed shortly after the floods, Kukulka said many homeowners didn't qualify for the funds. Landowners around Sanford lake are now dealing with erosion which poses another potentially devastating threat to their property.

"I know there are still people living out of campers, oftentimes on their own property because they can't get into their house," Kukulka said. "Stuff like that is unfortunately still common in areas that were heavily damaged."