Michael Alford said he had to make the toughest decision of his career on Tuesday. 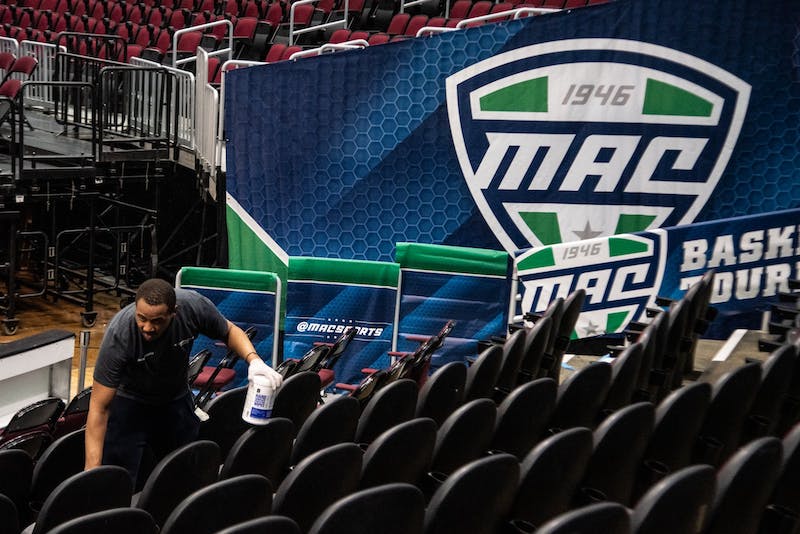 The athletic director at Central Michigan was forced to cut the men's indoor and outdoor track and field program due to the coronavirus pandemic.

"Today is a very difficult day for not only me, but our department," Alford said in a WebEx call with media. "We did not come to this decision lightly, but the COVID-19 pandemic has led to a new financial reality that has forced us to make the decision to discontinue men's track and field."

"We continue to work with our campus partners on additional reductions for fiscal year 2021 to ensure a balanced budget."

Alford said he spoke with the 36 athletes impacted, head coach Jenny Swieton and alumni to send his best wishes and express his apologies for the discontinuation of the program.

"I can't tell you how much my heart goes out to these student-athletes and the alums of the program," Alford said. "We will honor the scholarships for our current student-athletes and hope they remain at CMU. But if they wish to continue their athletic careers elsewhere, we will fully support them, of course."

Declining enrollment at the university and the COVID-19 pandemic have posed several financial challenges to CMU as a whole, not just the athletic department, Alford said.

"When I looked at the different models," Alford said, "I probably looked at six or seven, of trying to make it work, it was just impossible to make it work without this reduction. The inability to meet the financial needs of the program to be successful was the primary reason I chose to discontinue the program."

In terms of making a return in the near future, Alford said the need for long-term financial sustainability will prevent it from coming back.

Associate Athletic Director of Sport Administration and Communications Rob Wyman told Central Michigan Life the cut of the program is saving CMU $300,000 immediately and projecting a long-term savings of $628,798.

With the decision, CMU said it would honor the scholarships for each student-athlete — including incoming student-athletes — for their entire academic career at CMU, but are free to transfer elsewhere to continue their athletic career.

Alford said he wanted to take swift action to give the student-athletes the chance to find a new institution if the chose to do so.

"(The student-athletes) know what a great place this is," Alford said. "They know how much this university cares about them. Not only as an athlete, but their academic affairs. Just being a student prepares you to go out into the workforce. Central Michigan prepares you better than anyone."

As it now stands, CMU is at the minimum 16 sports to remain at the Division I level. However, the school is only at five men's sports when six are required for the Football Bowl Subdivision.

Alford said he submitted a waiver to the NCAA to allow time to bring the program back to compliance and he said he is "anticipating a positive response" from the body.

Should the response not be positive from the NCAA, Alford said he has several models to bring the department to full compliance in 2020.

"We've been studying this ever since the financial downturn, of looking to come up with solutions," Alford said. "As this has continued to get worse, this is a model we had to do for sustainability and being able to fund all of our programs to compete.

"I like to compete and I like to win across the board, and to be able to do that, to fund our programs at that level, this was the solution I chose."

Alford said the outlook for the rest of the department looks to remain unchanged, at least for now.

"As issues arise, we will look at providing the best solution," Alford said. "But right now, there is no plan to cut any other program at Central Michigan University."

As for the Chippewa Champions Center, Alford said the project has not been changed in any way.

"That project is supported by our donors and philanthropic support," Alford said. "That project will not be affected at all."