The Central Michigan soccer team ended its home schedule over the weekend by grinding out a 1-1 tie in overtime against Kent State on Friday, and overcoming a late goal by Ohio to beat the Bobcats 2-1 in overtime Sunday.

The Chippewas' record is now 13-1-2 this season and 5-1-2 in Mid-American Conference play. Five out of the team's last six matches have gone to past regulation.

By Megan Youngblood | 13 hours ago

On Friday, CMU was without Pelafas due to a yellow-card suspension. The Chippewas were outshot 23-5 by the Golden Flashes. Their only goal came from senior midfielder Eliza Van de Kerkhove in the 64th minute. 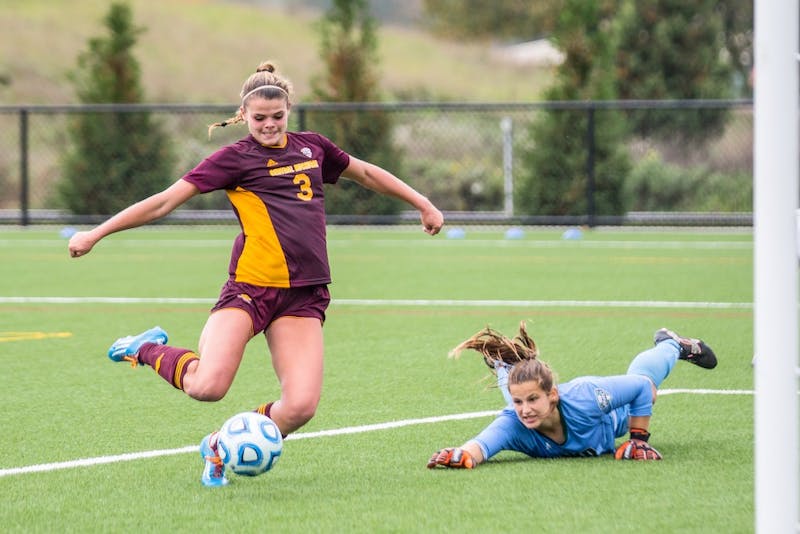 With rain misting in Mount Pleasant on Sunday, Central Michigan soccer found itself in the fifth overtime match it's played in its last six games, but a historic goal lifted the Chippewas to a 2-1 win over Ohio.

Head coach Peter McGahey said he thought his team did an acceptable job of filling in for its leading scorer.

“You’re only able to play the cards you’re dealt,” McGahey said. “Jamie Rademacher had an outstanding game. I thought Madison Costner and Shannon Magnan did a good job. Hats off to the team tonight.”

“She’s definitely a huge personality on the team. We definitely missed her out there,” Van de Kerkhove said. “She’s come a long way with her ability to lead on the field. We’re ready to have her back.”

Pelafas made her return to the lineup apparent on Sunday against Ohio.

With a constant drizzle of rain falling throughout the day in Mount Pleasant, the team looked to the sophomore constantly and she delivered on the scoring end, yet again.

In the 62nd minute, Van de Kerkhove sent a cross pass to the front of the net where Pelafas came flying in with a header to put it in the lower corner for the first goal of the game.

There weren't many scoring chances throughout the rest of the second half until late. Ohio turned up its pressure and tied the game with just 24 seconds remaining in regulation. The Bobcats' Hannah Jaggers found the back of the net to make the score 1-1.

With 5:54 remaining in the second overtime, Pelafas brought the ball up the field and blew by multiple defenders to get in front of the goal where it was one on one with her and the goalie.

She faked to her left, causing the goalie to fall to the ground and leave the net wide open. The Illinois native buried the goal.

Winning the game was what Pelafas said she cared about more than anything else — even breaking the record.

“We won this game and it’s each game at a time. Having this success for the team is an honor itself,” she said. “To have this win is important because every team in the MAC is a good team. Having the grit and the grind everyday is key for a win like today.”

McGahey said it takes a whole team to get the win, but the effort from Pelafas has been key to the team’s success this season.

“It does take a team to win, but I think (Pelafas') nose for the goal, her ability to sort of open up and change games and make it very difficult for opponents is really good,” McGahey said. “It's hats off to the team for being able to play to Lexi’s strengths, and hats off to her for continuing to believe and find ways to score goals.”

Goal Keeper Kristen Knutson earned her 13th win on Sunday. She had nine saves on Friday to help her team get the draw against KSU.

CMU is second in the MAC West Division behind Ball State, who is 7-0-1 in conference. The Cardinals' only tie came against CMU on Oct. 2.

The Chippewas have won their past seven games, which is the third best winning streak in the conference. They play at Akron on Thursday, at Buffalo on Sunday and end the regular season in Ypsilanti against Eastern Michigan on Oct. 27. The MAC Tournament begins on Oct. 30.

Thursday's game at Akron is slated to begin at 7 p.m.