Chippewas without leading scorer as soccer battles with Kent State on Friday, Ohio on Sunday

Sophomore forward Alexis Pelafas has a chance to put her name in the Central Michigan soccer record books this season, but the Mid-American Conference's leading goal scorer will sit out Friday as the Chippewas host Kent State.

Pelafas' 13 goals leaves her one away from tying CMU's all-time regular season goal record set by Allison Campbell in 2001. But because of a one-game yellow card suspension she received in last Sunday's 2-1 overtime win against Bowling Green, she will have to wait until Sunday's match against Ohio to attempt to tie or break the record.

Even though she is only playing one game this weekend, Pelafas believes she can break the record Sunday.

By Megan Youngblood | 13 hours ago

"We're gonna play like we have been and just be us. It'll come, we just have to be patient," she said.

The Illinois native is also chasing another record — the MAC all-time regular season goals record.  The current record, 19 goals, was set by Allison Wade from Northern Illinois during the MAC's inaugural season in 1997. 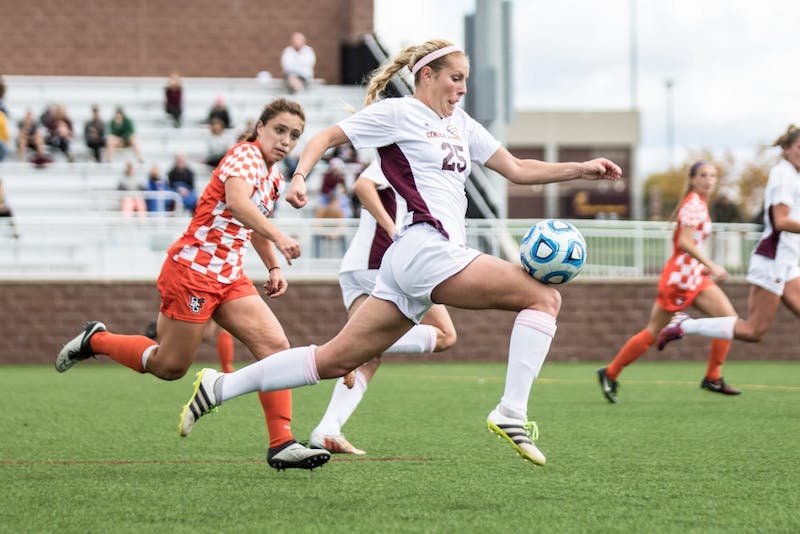 Soccer wins twice as sophomores come up clutch over weekend

The Central Michigan soccer team has played in three overtime games since Sept. 30 — more than 400 minutes of soccer.

The team's last game that ended in regulation was a 3-0 win against Toledo on Thursday.

Head Coach Peter McGahey knew Pelafas had potential to do great things this season. Just five games into the season, McGahey said "she won't be a surprise for very long."

Just like his star player, McGahey has a "team first" mentality.

"To set records like those, it truly takes a team effort and we will continue to approach that the same way," he said. "She plays to the team's strengths and the team plays to her strengths. Lexi's success is indicative because she fits in well with the team."

The team is offensively led by senior forward Jenna Helstrom. She has 10 goals — including four game-winners — and eight assists on the year, giving her 28 total points. She has played and started in all 11 games this year.

"The reason this is a big game is because of what we have accomplished up until now, but the reality is it's a big game because it's the next one," McGahey said. "(KSU) will provide their own unique challenges. This will be tough because of where it falls in the season and because they're a really good team. They have senior leadership and have been playing very good, but so are we."

Defensively, the Golden Flashes are led by sophomore goalkeeper Ashleah McDonald. She has started in 10 of KSU's 11 games and has only allowed eight goals. She has recorded four shutouts and carries a goals allowed average of 0.83 into Friday.

OU has scored 19 goals and given up 21 goals thus far in the season. On average, the Bobcats score 1.46 goals per game and give up 1.62 goals per game. They have scored more than two goals in only four games this season. Two of those games resulted in a draw.

The offense is balanced with seven players having scored two or more goals. Freshman forward Remi Eades is the main scoring threat for the Bobcats. She has only missed one game and still leads the team in shots (27), shots on goal (16) and is third on the team in points (6).

The Bobcats have also used three goaltenders throughout the season, but they have relied heavily on sophomore Erin Beurket. Her seven starts are more than any other goalkeeper on the team, but her record (1-6-1) is more of a reflection of the team as a whole. She gives up 1.68 goals on average per game and has made 45 saves this season. Her lone win was a shutout.

The Chippewas play Kent State at 6 p.m. Friday and play Ohio at 1 p.m Sunday. Both games are at CMU's Soccer/Lacrosse Complex.