CMU soccer's season broken down by the numbers

Despite an early 1-0 lead, Central Michigan's soccer season came to an end Friday as the Chippewas fell to Kent State 3-1 in the Mid-American Conference Semifinal.

Here's a look at CMU's season, by the numbers:

CMU started its 2016 campaign strong, winning its first nine games and setting a new school record for the program's best start to any season. 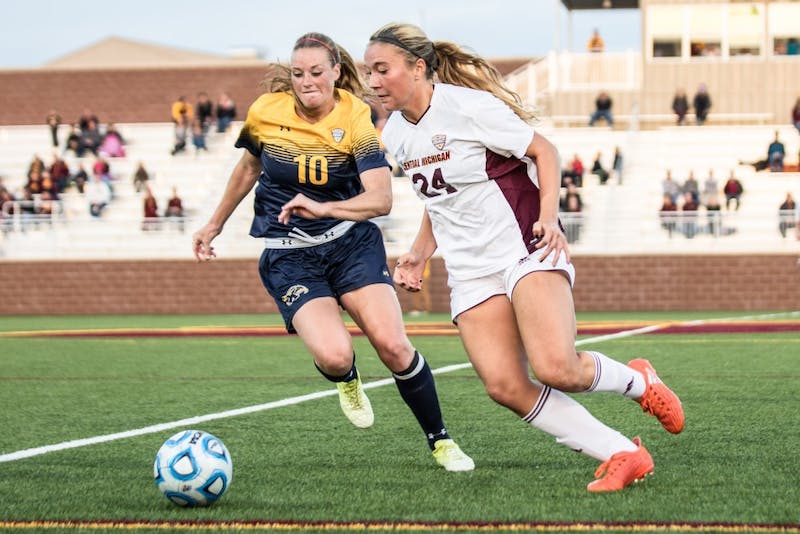 In soccer there is two half's of 45 total minutes. Central Michigan controlled the whole fist half with great fundamental defense and an early goal from senior defensive midfielder Taylor Potts who just returned from an injury.

The number of goals sophomore forward Alexis Pelafas scored this season. She set the school record for regular season goals when she netted two against Ohio on Oct. 16. The record was previously held by Allison Campbell, who had 14 goals in 2001.

The number of overtime minutes the Chippewas played in 2016. In seven of CMU's last nine games, an overtime period was needed to find a winner. Six of those seven overtime games went to double-overtime.

The amount of losses CMU had at home. The Chippewas went 7-0-2 at the Soccer/Lacrosse Complex and hosted the first playoff game in the stadium's history in the first round of the MAC tournament.

The amount of saves senior goalkeeper Kristen Knutson recorded this season. She had a record of 15-3-3 overall with nine shutouts.

The number of shots on net the Chippewas took this season. Of the 288, 137 were on goal, while 34 of them found the back of the net. The team had a total of 36 assists this season.

The number of goals that CMU averaged per game this season. The Chippewas’ found a way to hold their opponents to just a 0.90 goals against average this season.

The number of seniors who played their final soccer season for the Chippewas this fall. Eliza Van de Kerkhove, Samantha Maher, Taylor Potts, Kaylin Hoomaian, Christen Chiesa and Kristen Knutson will all graduate this year.

The combined number of spectators recorded at CMU's home games this season. In nine home games, there was an averaged of 227 fans per match.

By Masha Smahliuk | 8 hours ago