After more than 50 years of sports broadcasting, Central Michigan University alumnus Dick Enberg decided to turn off his mic.

The Armada native was invited to lead the CMU Marching Chips Tuesday night at the Chippewas football game against Ohio. Before he led the band in playing the CMU fight song, Enberg spoke to students and faculty members in the Music Building.

During his 45-minute talk, Enberg discussed his time at CMU, his early days in broadcasting and some memorable games he covered during his career.

CMU football focused on 'winning the now' as 2022 season begins

Defensive line depth shaping up to be strength in CMU's defense

After getting a $100 scholarship to attend CMU, Enberg said his first broadcasting job came as a disc jockey at a small radio station in Mount Pleasant. He had no previous broadcasting experience. 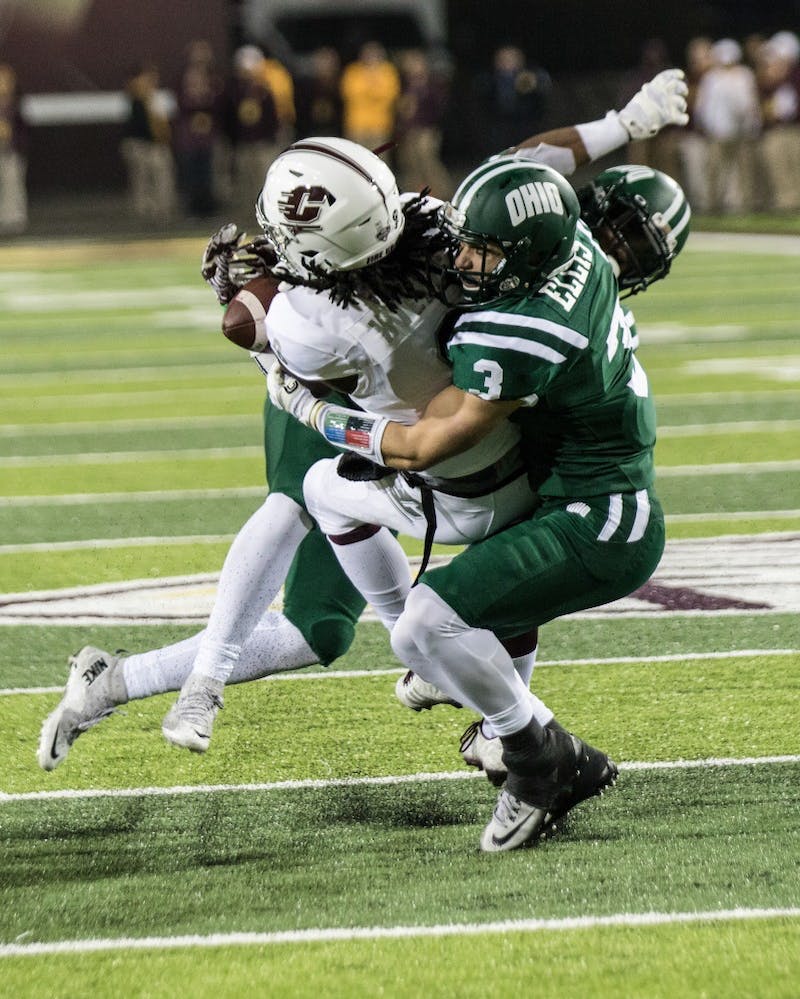 On a night where seniors played their final game on the turf at Kelly/Shorts Stadium and former players Derrick Nash and Zirlon Tipton were honored, the Central Michigan football team got back to its winning ways.

Despite not being prepared, Enberg said he was told “let’s just see how you do cold" on a recorded broadcast.

He did the recording, got a call three weeks later and was hired as the weekend disc jockey. He ended up making that $1 per hour he was hoping for.

“What if I was told I was the new custodian? That would’ve changed my entire life,” Enberg said.

He went on to work as the play-by-play television announcer for the San Diego Padres for the past seven seasons, but his experiences are not limited to just the MLB. Enberg has also broadcast NFL games, Wimbledon tennis matches and the Olympic Games.

Enberg said throughout his career, calling baseball games and Wimbledon were his all-time favorites.

“The best (game to announce) is baseball," he said. "It’s the most difficult and most challenging. There are long pauses and then there are exciting moments. My favorite event is Wimbledon. It’s two weeks, and it’s the greatest players in the sport, men and women, trying to secure their place in history. Wimbledon brought out my passion for sports.”

Enberg has won numerous awards throughout his career. He's been awarded 13 Sports Emmy’s, nine National Sportscaster of the Year awards from the National Sportscasters and Sportswriters Association and the Pete Rozelle Award from the Pro Football Hall of Fame. He has a star on the Hollywood Walk of Fame and is the only sportscaster to win Emmys in three different categories.

To go along with his broadcasting accolades, Enberg also has a prestigious award named in his honor at CMU. The Dick Enberg Student Athlete of the Year is given to a student-athlete who has at least a 3.2 GPA, has excelled in competition and demonstrates team leadership. This year’s winner was senior Christen Chiesa from the women’s soccer team.

Enberg was inducted into the CMU Athletics Hall of Fame in 1993.

At the end of his speech, Enberg told students to be more active outside and take advantage of what CMU's campus has to offer.

“With all the capability with texting and Facebook and all the rest, it concerns me that young people are going through life with their head down,” he said. “My little request is for you to take one hour on a Saturday or Sunday, put all of that away and walk down campus. See the beauty of this place and the beautiful people that occupy it. Although our advancements are terrific, don’t leave out the importance of being with people. Be like me; walk with pride, the pride that you’re a student here and proud to be a Chippewa."