The season will be over with another loss, but a win on Friday guarantees at least one more game for the Central Michigan women’s soccer team. 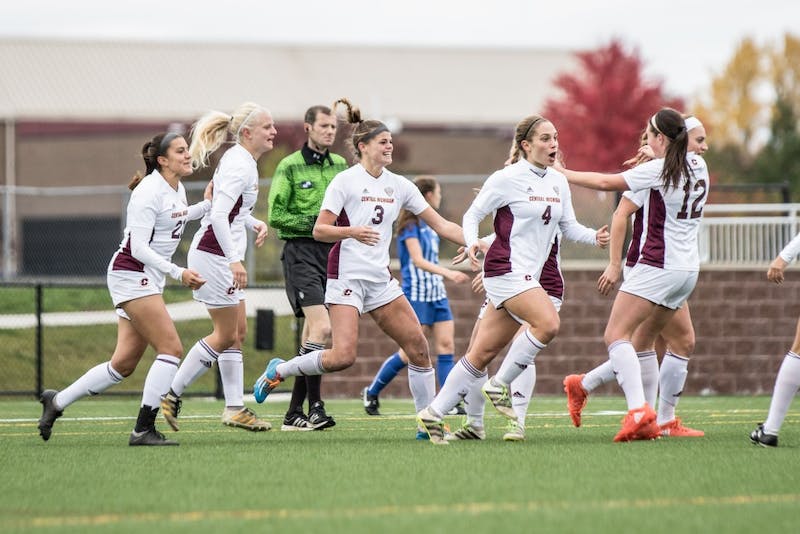 Buffalo has been a thorn in the sides of Central Michigan sports over the past few seasons.

Last season the Bulls took down the CMU soccer team in the MAC Quarterfinals on penalty shots.

The Chippewas defeated the Buffalo Bulls 1-0 in the quarterfinals of the Mid-American Conference Tournament last Sunday and earned a trip to Kent State to take on the Golden Flashes in the semifinals.

The lone goal came from sophomore forward Alexis Pelafas in the third minute of the match. It was the only offense CMU needed after senior goalkeeper Kristen Knutson stopped all four balls shot on net, including three saves in the second half, to preserve the clean-sheet victory.

Now the Chippewas are preparing for their pivotal rematch with Kent State. The first meeting in mid-October resulted in a 1-1 draw in double overtime at the Soccer/Lacrosse Complex.

Pelafas had to sit out during the match due to a yellow card.

“I would assume she’s excited to help this group of seniors play in their first semifinal,” said head coach Peter McGahey. “Whoever our opponent would be, she would be excited. I’m sure there’s probably a little bit of extra fuel because she didn’t get to play (Kent State) in the regular season.”

The Golden Flashes struck first in the 61st minute of that 1-1 draw, but CMU responded quickly with a goal in the 64th minute by senior midfielder Eliza Van de Kerkhove. Knutson made nine saves against the Golden Flashes.

“The hard part is you have to go into the game saying ‘are we preparing to do what we do relative to the game that’s going to be played?' Remember, (Pelafas) did not play against Kent State last time,” McGahey said. “That changes the complexion in terms of the team. (Taylor) Potts did not play either. I don’t think Friday night will look or feel like last time.”

Kent State senior forward Jenna Hellstrom has been the offensive leader for the Golden Flashes all season. She has 13 goals with 34 shots on goal, 10 assists and 36 points in 16 games in 2016. She had five shots and two shots on goal during the first match with the Chippewas.

“I have not focused on Jenna specifically (on tape), but the reality is when you focus on Kent State, you focus on Jenna,” McGahey said. “The issue is that Kent’s identity plays to Jenna’s strengths, much like how our identity plays to our players' strengths. Both teams have a pretty good idea about who we are and what we’re going to try to do.”

If the Chippewas win, they will play the winner of Northern Illinois and Western Michigan Sunday in the MAC Championship game.

By Masha Smahliuk | 9 hours ago