COLUMN: Use dating apps as a communication aide, not your only method

At this point in our lives, most college-age students with smartphones have tried dating apps.

Why? For me, it was for multiple reasons: I was busy and dating apps are convenient, I'm shy when it comes to romance and didn't want to risk embarrassment, I get bored and I wanted a confidence boost, among others.

Some have gotten me dates and relationships in the past, but I don't think dating apps should be taken as seriously as they are these days, no matter if you're using it for hookups, looking for dates or just looking to make new friends. 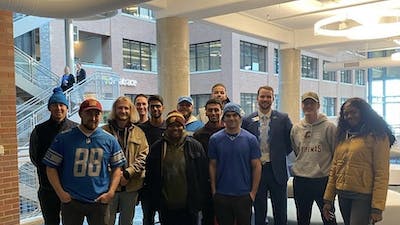 I'm not going to go so far as to say they're ruining communication, but they should be an additional source for you to find a connection, not the only one.

An article from Psychology Today states many people use dating apps for the same reason I used to, specifically citing "validation and self-worth" and "ease of communication" as concepts that draw in users.

Unfortunately, the positive impact people expect is thrown away almost as soon as the app is downloaded. Dating apps introduce users to a concept social scientists refer to as a "paradox of choice."

Roughly explained, it means humans think they will be more content with more options, rather than less. The more options you have to choose from, the concept says, the harder making decisions is, the pickier you become and the less you try to get to know someone before you decide to cease communication with them.

An article from Business Insider explains how defeating the concept doesn't mean you have to settle by stating: "If you're always holding out for something better, chances are you'll end up with nothing. That, or you'll realize you left all your good options in the cold and you'll end up with someone who's wrong for you."

This doesn't necessarily mean you'll lose out on finding "The One" or a great hook-up on Bumble or Grindr, but it does mean you're probably wasting your time weighing your options, which is probably stressing you out more than not having a partner in the first place.

A study by the University of North Texas shows mental health and body image is at risk with prolonged use of dating apps. Researchers found the prolonged use of Tinder increased concern regarding "body satisfaction, self-esteem, feelings of body shame, internalization of cultural beauty standards, comparisons to others and self-objectification."

Please note the key phrase here is "prolonged use." Just like everything else, dating apps should be used in moderation.

As a person who suffers from severe social anxiety and also paid attention to my mother's advice as a child, this is an almost painful request for me to make of you: Please talk to strangers.

Dating apps shouldn't be our only way to communicate with people we might have chemistry with - and, no, hitting on someone at a club or house party after drinking or smoking doesn't count as communication. Worst case scenario, situations like those can lead to sexual assault.

If it's a real mental struggle for you to say hello to people and strike up conversation, start small and start platonic. If you're a runner, say good morning or wave to three people you pass on your morning jog. Once a week, start a conversation with a service worker - the person swiping you in at a residential restaurant, the person bagging your groceries, the Safe Rides driver. It's all up to you.

Then, move on to people you'd like to get to know romantically. The key, here, however, is to make sure it's the right time to talk to someone. If you think that person is cute but they're reading a book? Don't talk to them. If they're wearing headphones? Wave at them as they pass by, at the most.  It's equally as important to recognize the opportunity to talk to someone/flirt with someone as it is to recognize that they are willing to talk.

That's part of the beauty of dating apps. You message someone when you want to talk, they message back when they want to talk. You meet up if you want to talk together at the same time. Easy. But as shown above, it comes with its risks.

So, when is it appropriate to approach someone?

When you're in line at Starbucks. Right before class in that weird portion of time where nobody knows when the professor will show up. When you're standing next to someone at a concert. When you're attending the same Program Board event. When you're volunteering. When you see a cute dog being walked by an equally cute person. At Centennial Nights. At a sports event. Just strike up conversation with anyone and everyone around you in social situations and chances are you'll click with someone.

I promise I'm not just some inexperienced source. I've initiated all but a few of the relationships I've been in - including my current one. Rejection is embarrassing and it hurts, but the more experience I get, the less rejection I experience, because I'm learning to notice the signs of when someone is interested, platonic or romantically, or isn't at all.

I hate to sound like my mom, but sometimes the opportunity comes when you least expect it.

So, yes, go forward, and and swipe on, but don't restrict yourself to flirting only through dating apps.

By Kaia Zimmerman | 15 hours ago