Sharing tales from the Middle East

For the first six minutes of her performance, Biba Sheikh did not speak. She backed up against a wall in Central Michigan University’s Art Gallery, leaving her audience in silent anticipation. Sheikh closed her eyes, breathed deeply and touched the artwork around her. She shed her own identity.

Opening her eyes, Sheikh craned her neck up, looking at her environment. She walked in slow motion and stretched out her hands. Her movements transitioned from fluid turns to rigid steps. 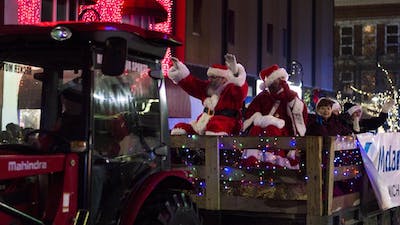 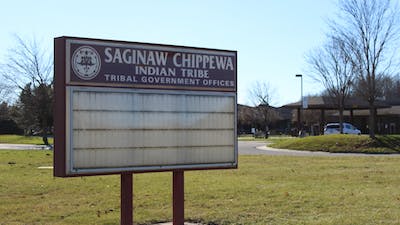 The audience sat either on chairs or the floor, their gaze rarely breaking from Sheikh. The gallery was quiet, aside from Sheikh’s light footsteps, occasional shuffling of bodies, and the sound of a camera’s shutter going off.

“You are so poor,” were Sheikh’s first words. She walked toward the center of the gallery. Her voice sounded ghostly and heartbroken. Sheikh repeated those words, her voice getting louder.

“There is no support!” Sheikh’s voice rang. She spun around as if the world was slipping under her feet. Multiple times she stumbled to the ground then got back up. She made her way back to her original corner, her voice choked as she repeated those words.

She was no longer Biba Sheikh. She was a Syrian refugee, telling stories of life in the refugee camps and orphanages of Greece and Lebanon. For more than 40 minutes, she was the transmitter for survivors of abusive relationships and human trafficking. Those fleeing their homes in Syria to avoid being captured by ISIS. Groups of 80 people in inflatable boats made for eight, paying large sums of money for traffickers to secretly lead them from Turkey to Greece. Only to arrive to a country that could only provide so much while suffering from their own economic collapse.

Their stories became the script of the production, “Mitli Mitlak,” performed during the “Mitli Mitlak - Like you, Like me.” exhibit reception at the University Art Gallery on Thursday, Jan. 17.

While leading storytelling and theater workshops at the Syrian Solidarity House, a refugee camp in Greece, Sheikh collaborated with individuals to create poetic texts that turned into “Mitli Mitlak.” The production was co-directed by Sheikh and Haitham Khatib, a Syrian refugee, actress and shadow theater specialist.

“A lot of them don't have voices at all from the traumas of being abandoned,” Sheikh said. “During the workshops they recreated what happened to them and were able to express what they wanted. The only way to counter the horrific nightmares they saw in war and on the journey is by making beautiful memories. We help them find their voices again.”

The performance is only a third of the exhibition. The exhibit features over 70 pieces including paintings, mixed media, photographs and digital images by 13 contemporary international Islamic artists from 11 Mediterranean countries. Many of the artists are currently living in refugee camps or occupied territories. The artwork was created in response to Sheikh’s writings and the artists’s own experiences - "a peaceful way of resisting," as Sheikh puts it.

This is illustrated in “Daily Images of Chaotic Events,” a series of 12-by-16-inch photographs of the Egyptian Revolution. The photographs were captured on a cell phone by Ahmed Nagy of Egypt.

“Flower of Freedom (Separated From Every Garden)", is a series of acrylic on canvas paintings by May Murad of Palestine. The character in the paintings, Ruba, experiences feelings of disorientation, confinement and uncertainty after ending her marriage plans.

The exhibit further enlightens its audience through “Citizen Xenos,” a documentary about refugees arriving in Greece. It was created by Greek visual artist and film director Lucas Paleocrassas. Starting in 2015 alongside his current producer, former refugee volunteer Valia Charalampidou, the two spent a year conducting interviews for the film. They interacted with refugees, politicians, medical professionals and United Nations representatives. During this time Paleocrassas met Sheikh at the Syrian Solidarity House and he filmed parts of her workshops.

Sheikh began researching various artists and foundations for her exhibition in 2015. Initially, the focus of the project was a theater production with a complementary exhibit of general Middle Eastern and Mediterranean art. After deciding to make the visual art the focus, she realized many of her chosen artists were refugees.

“I did a research on the prisons, the military, weapons, distributors and refugees,” Sheikh said. “There are so many things that I learned about war and peace, how society functions and what happens to human beings in these extreme circumstances.”

The exhibit made its debut at the N’Namdi Center for Contemporary Arts in Detroit last September; CMU is the second place to host. Sheikh contacted Anne Gochenour, director of the University Art Gallery a year ago. With 30 years of experience in curating art exhibitions across the country, Gochenour’s aims to expose students to art they may have never seen before.

“The idea of having Middle Eastern and Islamic artists showing, I haven't seen much of it,” Gochenour said. “It's a very rich show of visual art, and very different to have a performance piece with the visual arts. [“Citizen Xenos”] is very powerful. The people that come are really engaged and I can't ask for more than that. I think people are really moved by the work.”

Biba’s own life experiences as a dancer, writer and director are a testament to the time put into curating “Mitli Mitlak - Like You, Like Me.” Born and raised in Michigan, Sheikh has dedicated much of her life to healing the world through dance, poetry and other forms of expression.

At age 19 she studied mime at the International School of Mime and Drama under the instruction of French mime artist Marcel Marceau. She continued her theater studies in Greece, Italy and Germany in the years prior to and after the end of the Cold War in Berlin in 1989 and the Lebanon Civil War in 1990. Inspired by these historic events, Sheikh has since led workshops and courses in vocal and drama therapy, sonic expression and theater in Lebanon and Spain.

In Spain in 2011, Sheikh transformed a workshop into the theater production, “Fathers, Mothers, Sons, Daughters,” focusing on therapeutic acts and rituals toward the healing of families. The following year, also in Spain, she produced and directed “Exodos,” depicting the Kurdish exodus through Flamenco singing and theater scenes. As a professionally trained Flamenco dancer, Sheikh incorporates the dance form into her work.

“Mitli Mitlak - Like you, Like me.” is scheduled for presentations in Wisconsin and Indiana, as well as overseas in Iceland and Lebanon between now and mid-2020. Dates for exhibitions in Greece are in the works for 2021. This exhibition is the launch for Sheikh’s LLC, Mediterranean Fire, an organization providing refugee youths with educational and creative training. Sheikh hopes to turn Mediterranean Fire into a foundation.

As this exhibition grows, Sheikh aims to bring in more artists from Jordan, Italy and Spain. But most importantly, Sheikh wants to continue providing accurate representation of Arab culture.

“Like many cultures the Arab culture is viewed from Western glasses. These glasses should be taken off to see [Arab culture] as it is,” Sheikh said. “I hope [the exhibit] expands [people’s] horizons. I like to create projects that people really remember for their whole life.”