Loveland: Gabi Bird is the glue that makes women's basketball capable of winning

It’s a classic basketball cliché. A player that helps bring the team together and shows up in big moments is the “glue player” of the team. Most clichés are tired, old and make people roll their eyes.

However, looking through the history of successful teams at any level of basketball, every team has a glue player.

For the Central Michigan women’s basketball team, that player is Gabrielle Bird. 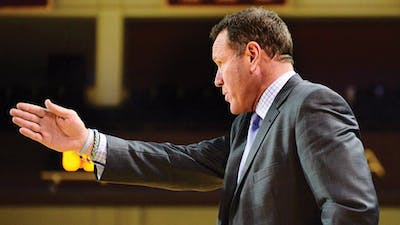 Bird has been a surprise so far this season, she came into her senior season with a career per game scoring average of fewer than two points per game. This season, she is averaging 9.5 points per game and the number has continued to rise. While statistically, she has drastically improved, her effect cannot be measured purely on statistics.

Her impact can only truly be seen when watching the Chippewas play.

Junior guard Micaela Kelly has been otherworldly so far this season, consistently ranking in the top five in the country scoring 24.2 points per game, Kelly is the clear leader for this team, but Bird has been a big factor coming off the bench.

Bird emerged Dec. 5 when she had a career-high 21 points against Iona. After the game, Bird was incredibly humble and team-first.

“That's my role on this team," Bird said following the Chippewas 70-50 over Iona, "to give what needs to be given."

Fast forward about a month later, Bird stepped up big at the end of the game against Ohio.

With 10 seconds left in the game, Bird received the ball from the inbounds pass and pulled up from behind the 3-point line, the shot went in giving the Chippewas a two-point lead at 73-71 and leaving seven seconds on the clock for the Bobcats to try to tie or win the game.

Just three days later, Bird stepped up big for the Chippewas again. Bird had a key defensive stop and scored seven points in a two-minute stretch in the fourth quarter to help propel the Chippewas to victory before a big 3-pointer iced the game for CMU.

After another big performance from the South Lyon forward, she reiterated that her role is whatever the team needs any given day or night.

Now in her fifth year, Bird’s on-court experience and ability to show up in big moments is just one piece of being the glue player. She has the ability to galvanize this team and help lead them to a third straight NCAA tournament appearance.

“It’s amazing," senior forward MacKenna Kelly said about Bird’s breakout year. "It’s really fun to see and we tease her all the time about it just because she’s had some really key plays in the last couple of games. She’s been doing it in practice for as long as we can remember, it’s good to see it finally play out in games.”

One way or another Bird will be a key factor for this team come March. No, she won’t be the leading scorer, Micaela Kelly will take care of that. She isn’t the fresh face, save that for freshman point guard Molly Davis who has Chippewa fans excited for the next four years. Bird is the traditional glue player, and her job as she so often says, is to give what needs to be given — she will do just that.