Central Michigan offensive line coach Mike Cummings approached a duo from Macomb Dakota high school with a mission. Jim McElwain, who was nearly four months settled into his new job as the Chippewas' head coach, had sent Cummings to retrieve Eric Reese and his high school teammate, DJ Stepney, and bring them into his office.

The two, each on their first college visit in late March 2019, eagerly obliged. Stepney was offered by the Chippewas on December 30, 2018, shortly after McElwain accepted the coaching job. Reese, however, was without an offer.

That changed early in his first conversation with coach McElwain. 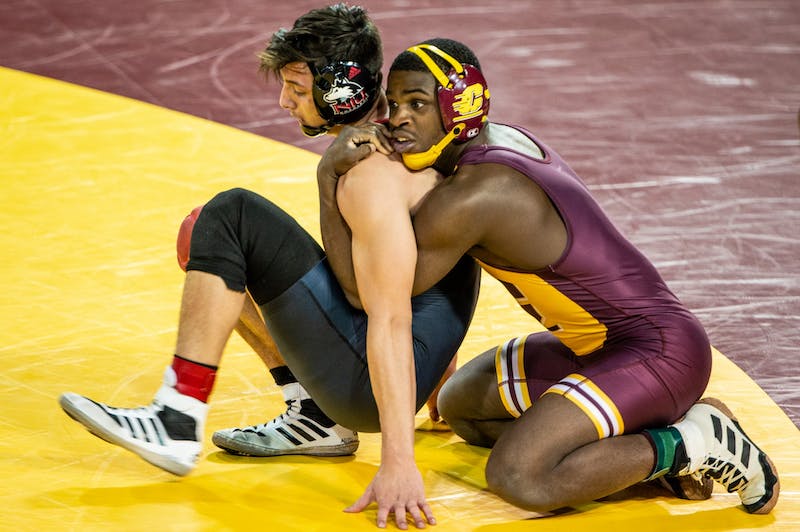 "I just wanted to let you guys know that you both have full-ride scholarships to Central Michigan University," Reese recalls McElwain telling him and Stepney.

Nearly a year after he exited the Chippewa head coach's office with a scholarship offer and a grin, Reese announced his commitment Sunday afternoon via Twitter. He joins Stepney, who committed a week ago, and three others who comprise the Chippewas' current class of 2021. Reese is eager to take the field with Stepney and keep the Chippewas at the top of the Mid-American Conference.

"Me and DJ, we have a really good connection on and off the field," Reese said. "On the field, we kind of connect. We hold each other accountable."

Having taken their visit to Mount Pleasant together, the two of them were in close contact about the possibility of playing there together. When Stepney committed last week, the deal was all but sealed. With both of them committed, they have set their sights on convincing their teammate, wide receiver Clinton Roberson, to join them. Roberson also holds an offer from the Chippewas.

"We think we can change the whole offense around (if Roberson commits)," Reese said. "Me at receiver, Clinton at receiver, DJ at running back. We've got big plans."

They're not stopping with just Roberson, however. The end goal? Bring as much talent to Mount Pleasant as possible. The tandem wants to bring championships to Central Michigan.

"I don't know necessarily who (Stepney) has been talking to, but I'm going to try and get into more of that," Reese said. "I'm definitely going to start texting people like, "Hey, Central's the place to come.'"

Like Stepney, Reese is a two-way athlete. 247Sports has Reese listed as a cornerback but both he and the Chippewas believe in his ability to deliver on both sides of the ball. He also held offers from Akron, Bowling Green, Buffalo, Eastern Michigan, Kent State and Western Michigan.

Reese is a two-way starter at the highest level of high school football in Michigan. He's confident in his abilities and invites any who doubts him to watch him take the field.

"I'd rather show than tell," Reese said.

For now, any showing at Central Michigan will have to wait one more season, as Reese still has unfinished business at Macomb Dakota. He fractured a toe during his sophomore season, causing his numbers to drop in 2019. Once he takes advantage of his final season, it's on to Mount Pleasant.

Once he's there, there will be a spot for him and, with his eagerness to contribute, it's hard to fathom him not taking it.