Mario Camilletti’s role as a lead-off hitter is simple; get on base, set the table for the lineup.

The junior and national leader in walks needed to spark Central Michigan trailing 3-0 in the bottom of the third. Instead of drawing his 62 walk of the season, the Oakland transfer hit his third home run of the season off the left field foul pole, igniting a pivotal  five run, six-hit third inning to give the Chippewas (42-17) a 14-9 NCAA Tournament victory over Connecticut (34-19) Sunday at Frank Eck Field in South Bend, Indiana.

The Chippewas will play Notre Dame at 6 p.m. Sunday in an elimination game. A win over the Fighting Irish Sunday will result in a winner-take-all game against Notre Dame at 1 p.m. Monday. 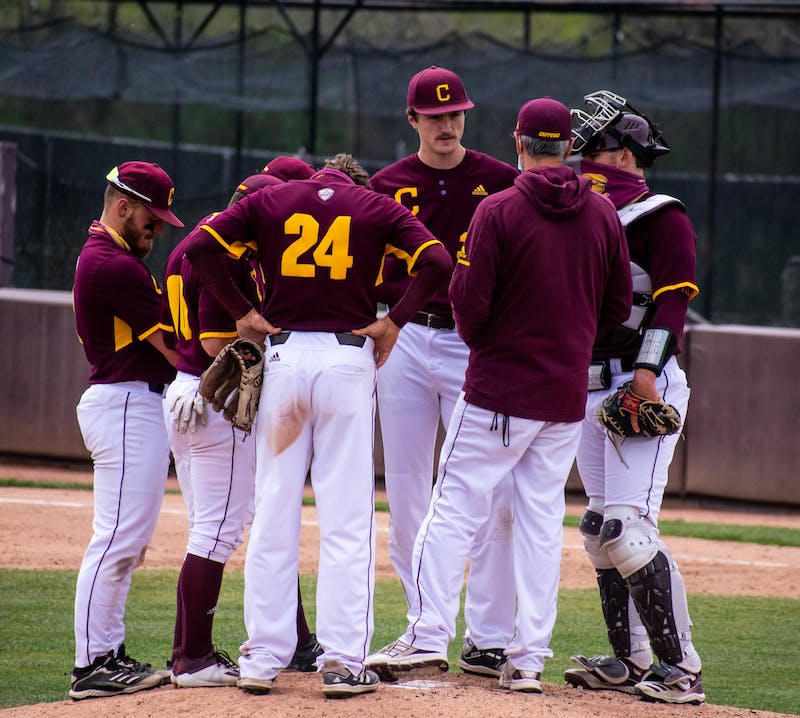 After working a full count and two outs in the top of the second, Huskies third baseman Chris Brown belted a pitch at his knees well beyond the left field fence for a two-run home run, placing CMU in an early 2-0 deficit. The Huskies used another long ball from Erik Stock to take a 3-0 lead in the third.

The Chippewas would not go gently into that goodnight.

Camilletti mashed an opposite field pitch to cut the CMU deficit to two runs. With runners on the corners, senior Zach Heeke fought off an inside fastball that dribbled into the gap between second and third base to cut the Huskies lead to only one run.

With the Chippewas down to their final out of the third, junior Aidan Shepardson blooped a 2-2 pitch to centerfield, scoring Zach Gilles and Heeke to give CMU a 4-3 lead. After Chase Rollin ripped a single to left center, sophomore Justin Simpson cranked the 10th pitch of the at-bat to center field for an RBI ground rule double, capping a five run, six-hit third inning.

A bunt by Gilles allowed the senior to take first base, but Huskies catcher Pat Winkel air mailed his throw to the first base barrier deep into left field to score Jakob Marsee from second and Gilles to take second. Heeke would swing on the first pitch he saw, cranking an opposite field home run to give the Chippewas an 8-3 lead. After a Connecticut pitching change, pitcher Garrett Navarra gave himself an insurance run with a home run to right for a 9-3 CMU lead.

The Huskies would score two in the fifth behind an RBI hit from Christian Fedko and a sacrifice fly from Stock to come within four runs and pull within one run off a three-run home run in the top of the seventh to shrink CMU’s lead to 9-8.

Junior Chase Rollin led off the bottom of the seventh with an 0-1 home run to left, kickstarting CMU’s second five run, six hit inning in the seventh, featuring an RBI knock from Camilletti and two UConn defensive miscues off bunts by Gilles and Heeke and an RBI fielder's choice by Shepardson for a 14-8 lead.

Crawford ripped his second home run of the game in the top of the ninth to narrow the UConn deficit to five runs.

The Chippewas hit around the lineup in two separate innings and mustered 24 baserunners. Their 14 runs scored are the third most this season, scoring 15 against Dayton March 21 and a season-best 17 against Northern Illinois on April 3.

After mustering six hits against Notre Dame on Friday, CMU has registered 22 runs off 30 hits in victories over the Huskies and Michigan.