With less than five minutes on the clock, junior midfielder Matilda Melin attempted to give Central Michigan soccer a lead. However,  her shot soared just inches above the goal.

Toledo is left looking for their first Mid-American Conference win, while CMU is looking at the draw as progress.

“I think you know, it’s progress for us for sure with the number of injuries and young players that we have,” said head coach Jeremy Groves. “I told the team, probably three or four weeks ago we would have lost this game. We went one nil down and fought back, which is positive. You know we both had pretty good chances, so I think in the end probably a draw is, you know, an even result.”

The Rockets' forward Morgan Otteson put the ball in the goal first at the 23-minute mark after Toledo put three shots on net in less than 30 seconds.

Three minutes later, CMU junior forward Elizabeth Chlystun kicked the ball into the left corner of the net. However, an offsides call on the Chippewas resulted in no goal.

“Toledo is always a tough opponent,” Groves said. "They are always really physical and it's something we expected but I think as well over the past three or four weeks, we’ve started to compete a lot harder which means more physicality." 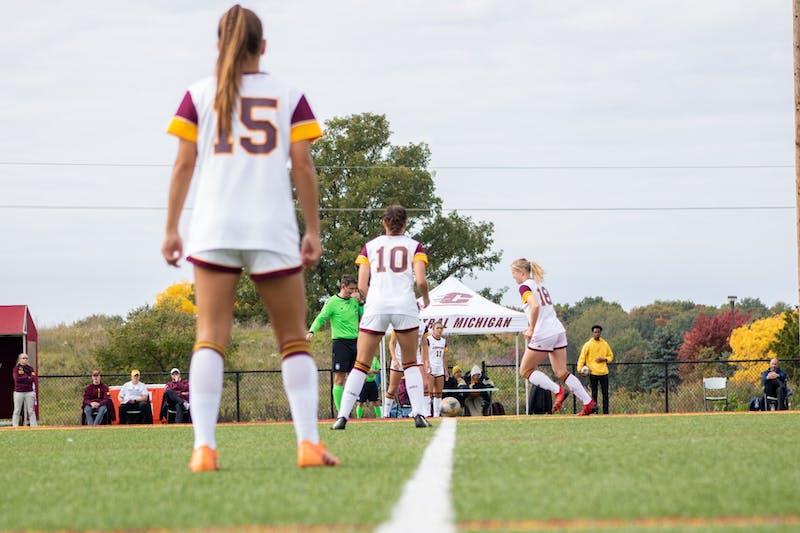 With just five minutes remaining in the first period, the Chippewas were looking to spark something before the half. CMU sophomore midfielder Ashley Scesniak took a shot, but the ball hit the top of redshirt freshman goalkeeper Karson Hill's fingers and went over the goal.

Freshman goalkeeper Emma Shingler made a diving save in the bottom center of the goal to start the second half.

“I think (Shingler) is gaining confidence,” Groves said. "I think she is starting to do the simple things very well. She came out and collected a bunch of good crosses, made a couple good saves. And as a young player, I think as she kind of plays more and gets more confident she's going to get better, and I think that's what we're starting to see.”

Shingler made her seventh save of the day at the 73-minute mark as she dove into the corner of the goal.

Keeping with the momentum, a minute later Chlystun took charge towards the left side of the goal. She found Scesniak near mid-field, who kicked it far into the back of the goal and tying the game 1-1.

“I'm really happy that we fought back,” Groves said. "We are starting to have a little bit of relief and we went the whole weekend undefeated so that's a good thing."

The Chippewas are back at home on Thursday as they take on the Ohio Bobcats at 6 p.m.

Medical bias against women of color: discussion of unspoken treatment in medical system

By Masha Smahliuk | 35 minutes ago

Medical bias against women of color: discussion of unspoken treatment in medical system

By Bryce Hollins | 21 hours ago