An outside consultant has created an extensive proposal for changes to Central Michigan University's campus that would cost $550 million.

Barrie Wilkes, vice president of Finance and Administrative Services, said the proposal would include the expansion of dining and residence halls. The CMU Board of Trustees’ Finance and Facilities Committee discussed financing parts of the proposal over several years at its Dec. 6 meeting.

Wilkes said the northern sector of CMU's campus needs to be "brought into modern times." 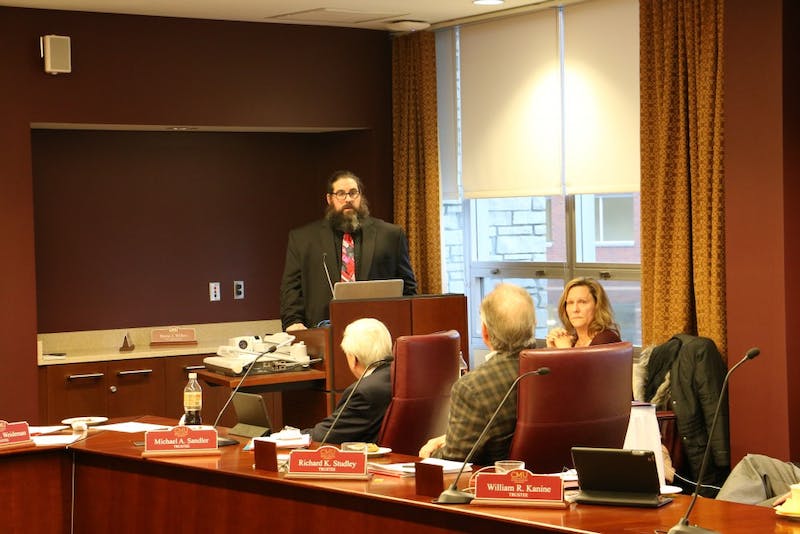 He added the university has considered renovating residence halls north of campus — Barnes, Calkins, Larzelere, Robinson and Trout halls — and the renovation would cost $40-50 million.

Wilkes said even after this expense, “(CMU) still would have residence halls that were built in the 1950s. “

This is where the renovation project comes in.

Wilkes proposed the addition of 510 beds to the southern sector of campus, expansion of dining halls and the eventual removal of northern residence halls.

Jonathan Webb, associate vice president of Facilities Management, said the project is intended to "improve the storage and discharge of rainwater by creating three detention ponds on campus."

The project is expected to cost $690,000-$930,000 —75 percent of which would be granted from FEMA. The remaining 25 percent would be covered by CMU, Mount Pleasant, Isabella County and Union Township.

A response from FEMA is expected by the end of January 2018. The delivery of the grant is expected to arrive the following summer .

The committee, created in 2002 by former CMU President Michael Rao, added two women's sports — women's golf and lacrosse — in response to a 2011 mandate from the Office of Civil Rights.

· Building and renovating the athletic washrooms for women's soccer and gymnastics.

· Implementing the current maintenance plans for men and women's track.

· Continuing the assessment of the Baseball Performance Center to discern what future Title IX disparities it may create.

President George Ross asked Ian Davison, senior vice provost for the academic organization initiative, to describe the tone of the Dec. 6 Academic Senate meeting in response to Davison’s presentation on the review.

“We’ve had some people who very inappropriately made personal attacks on Ian Davison and myself,” Ross said.

Davison said questions were passed in a professional manner and he believes the operation of the review is the epitome of shared governance.

“We are essentially making sausages, no matter how wonderful the sausages are,” Davison said. "In the end, the process tends to be a bit messy."

A proposal was presented by Cindy Schumacher, the executive director of the Governor John Engler Center for Charter Schools of Central Michigan University. The center authorizes K-12 education for more than 28,000 students in the state.

“There were a couple of things we’ve shared from changing some education service provider provisions,” Schumacher said.

Schumacher proposed the Board of Trustees change its method of appointing and removing academy board members. Specifically the appointment of conservators, who may be summoned to oversee a school’s activity in light of suspensions and dismissals.

“Currently the charter contract allows us to appoint a conservator, but in order to do that it takes a full board to have action,” she said. “That creates a challenge, as you can imagine, because the need for a conservator can happen at anytime.”

The proposal recommends Ross or a designee be able to appoint a conservator after consulting with a university board chair. The full Board of Trustees will then only have to ratify appointees at a following meeting.

Steven Johnson, vice president of Enrollment and Student Services, gave a presentation on “the evolution of student support.”

“As we think about the current highlight of our strategic plan, this is essential in understanding how we support them in achieving their goals and completing their prospective program in four years, and the number of hours required for the program,” Johnson said.

Johnson said Student Services intends on being more hands-on with students, providing them with resources for character development and academic discipline in their first two years and with career opportunities later down the road.