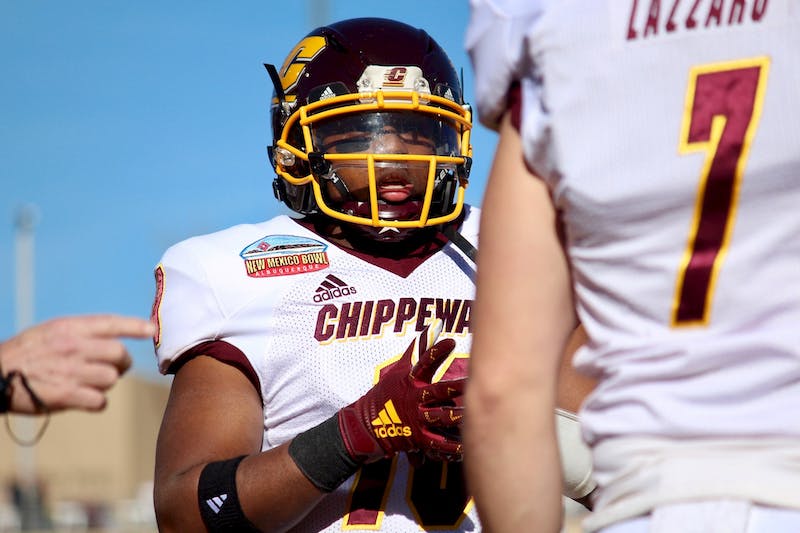 The star of the show, Jonathan Ward, loosened up away from the others. His headphones gripped to his ears, blaring a personal playlist. His loosely fitted black NFLPA Collegiate Bowl sweatshirt served as a remembrance of his superb performance.

The 2020 NFL Draft hopeful was locked in.

Ward, the former Chippewa running back, held a workout Monday at CMU’s Soccer Complex – no coaches, no scouts, no drama. A non-Power Five prospect, already feeling snubbed from the NFL Scouting Combine, Ward is doing everything in his power to get his name on the radar of professional teams, even as the coronavirus pandemic has made so many feel powerless.

Instead of participating last Friday in CMU’s Pro Day, which was canceled due to the COVID-19 outbreak, Ward stepped on the outdoor soccer field in white Nike cleats with plenty to prove.

An underdog once again, Ward believes he is the most versatile running back in the draft class, and he’s in pursuit of proving it to the world.

"I don't feel like there's any other running back in this class that can line up at any position with as much confidence as I do," Ward said. "That's how I'm trying to raise my draft stock. I'm trying to show the scouts I can bring more to the table."

Ward didn’t run the 40-yard dash, not that he can’t, nor did he showcase anything out of the backfield. He already accomplished those tasks at his all-star game following the 2019 season that CMU finished 8-6. His workout rather showed agility, footwork and, the part of his football DNA that sets him apart, pass-catching. He simulated breaking through the offensive line by flipping his hips and executing jump cuts and spin moves along with finishing in one-on-one situations against a linebacker.

He registered 329 yards receiving last season, 12th-best among running backs in college football. Of those backs, he had the fifth-most rushing yards at 1,108 to go with 15 touchdowns in a two-man backfield.

"Anybody can run the ball," Ward said, "but I can catch, block and get that 1-yard when I'm called upon on fourth-and-1."

Those numbers mean more to Ward than just a drastic improvement from his 212 rushing yards and one touchdown in 2018. They also symbolize what growth off the field, in the leadership category, can do. Two seasons ago, Ward wasn't the same person. Since that 1-11 campaign, he's altered his demeanor.

Ward self-described his actions of old as a lack of maturity, and while that might come off as a negative, he wants scouts to focus on his development as a person.

"Looking at life in general from a different point of view," Ward said. "I'm not taking anything for granted. I'm staying grounded. If you put the work in, it'll show. You can only control what you can control. That's what I learned."

Offensive coordinator Charlie Frye noticed Ward's maturity develop most from winter conditioning to the beginning of the season.

"Going through a time and getting another crack at it, saying, 'No, I don't want to be like that. I want to make it about my guys,'" Frye said. "That's the growth that you see. That will help take him to the next level on his journey."

A projected late-round selection or undrafted free agent addition, CMU's Pro Day served as Ward's opportunity to get in front of representatives from all 32 NFL teams. He's now preparing without pro day and pre-draft visits, of which the latter was canceled by the NFL.

To combat the nixed events, Ward and his agent, Orlando Arnold, are taking matters into their own hands. Arnold is sending the running back's workout film to every NFL squad.

"If I would've had pro day, then I definitely would have boosted my stock to jump into the second day or early third day (of the draft)," Ward said. "Definitely a curve ball, but like in the game of football, you have to adjust. That's getting in extra work."

Ward has always dreamt of being a high draft pick, much like his former CMU teammate Sean Murphy-Bunting was as a second-round selection to the Tampa Bay Buccaneers in 2019. Ultimately, it comes down to an opportunity, and he's confident that will happen.

One opportunity is all it took for Tyler Conklin, a former CMU tight end and Ward's teammate for two years. Using the combine and pro day to his advantage, Conklin was drafted by the Minnesota Vikings in the fifth round of the 2018 NFL Draft.

Two years ago, he was in Ward's shoes – an NFL draft hopeful, ready for any chance.

"Pro day is a huge deal for under-the-radar players," Conklin said. "I feel bad for all of those guys in that situation, but I'm curious to see how the NFL tries to make up for it and give these guys an opportunity to show what they've got. There are a lot of diamonds in the rough, especially in the MAC."

And Conklin, who has played 31 games in his two-year NFL career, is certain Ward has what it takes.

"I talked to him a week and a half ago," Conklin added, "and he just told me how this is messing with his head, going through this whole process. I told him, 'It's all going to work out the way it's supposed to and everything happens for a reason.'

In the 2017 and 2019 seasons – Ward's best in terms of statistical production – as a sophomore and senior, he combined for 2,132 rushing and 799 receiving yards with 29 total touchdowns. Throughout all four years, he went for 2,544 rushing yards, 909 receiving yards and scored 32 times. He also has experience returning kickoffs and punts.

Ward was named to the All-Mid-American Conference team twice in his career – second team in 2017 and third team in 2019. A Division I assistant coach, not from CMU, was quick to anonymously badger the conference about Ward's third team finish, saying, "Ward not getting first team is BS."

Since the end of the season, Ward has added approximately six pounds, now up to 208 pounds. He wants to showcase an NFL-type body and be prepared to take on blocks from the pros.

Playing the game his own way, Ward isn't quick to compare himself to anybody. But he's heard others say his style resembles that of New Orleans Saints running back Alvin Kamara. He had 797 rushing and 533 receiving yards in the NFL last season.

"He's the first person that comes to mind that's in the league right now that fulfills that standard of being versatile," Ward said. "I want to show myself as that type of back."

Serving as the underdog for his entire career, already feeling counted out as a prospect from the MAC and missing pro day and other pre-draft workouts as an impact of the coronavirus, Ward feels like he got the short end of the stick. But he hopes scouts realize the versatility he can add to an NFL offense before it's too late.

If given the chance, Ward is determined to shine.

"My play speaks for itself," Ward said. "I know I can compete and play, so it's just time to stop being overlooked. I'm a sleeper in the draft. It's always been this way. Whoever gives me the opportunity will be satisfied with what they get. It motivates me."

By Benjamin Jodway | 16 hours ago