A World of Difference

Outside hitter Kaitlyn McIntyre has accomplished a lot in her three years as a member of the Central Michigan Volleyball team.

The senior was met with success early into her career at CMU, winning a Mid-American Conference Championship her freshman year.

“It would be awesome to get another one. That’s what we’re working toward everyday,” she reminds herself. 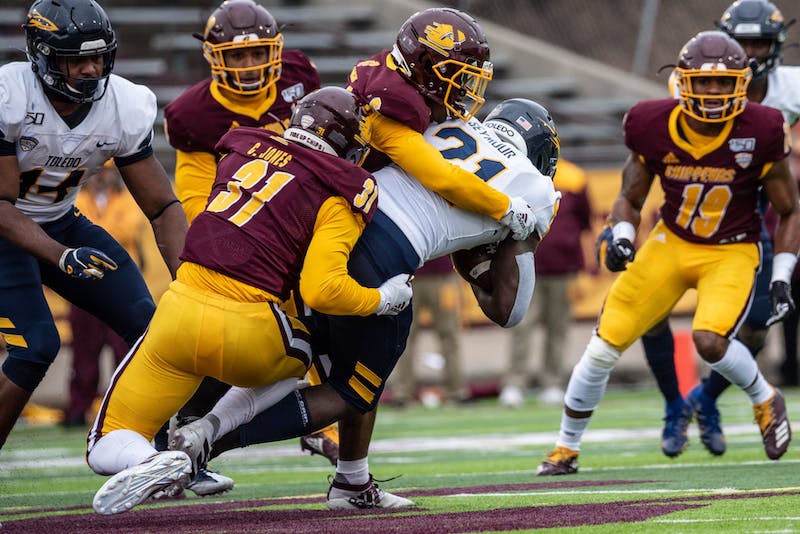 Three years later, the Beaver Dam, Wisconsin native enters the 2014 season as the Chippewas best talent and undisputed leader on the floor.

Her senior season comes at the tail end of what has been an incredible year filled with worldwide praise.

McIntyre was selected by Tim Kelly, Owner of Bring It Promotions, to play for BIP’s USA Team in the 2014 European Global Challenge in Pula, Croatia in July.

She is the only Chippewa in Head Coach Erik Olson’s 11-year tenure to be named to the team, and was introduced to Kelly by CMU Assistant Coach Mitch Kallick.

“The opportunity came about and coach wanted me to send him an e-mail about who I was,” she said. “He said we want you on the team and just made it happen from there.”

The competition included teams from Russia, Italy, Croatia and Slovenia.

McIntyre said when she was invited to participate, she knew immediately which elements of her game needed to improve.

“I found out I was going in March so I still had the rest of the spring season to work on a lot of back row stuff,” McIntyre said. “I used open gym in the summer to sharpen up. It’s a different brand of volleyball. Playing with better players and against better players makes you a better player.”

Olson said the experience McIntyre gained was glaring as the Chippewas entered the 2014 season.

“The biggest thing is her passing,” Olson said. “I watched online her first international match and she ended up two-man passing against some international teams. I was like ‘wow,' she’s never done that for us but that’s what they needed her to do."

The self-assurance McIntyre gained overseas is something Olson listed as an invaluable takeaway from her experience with some the world’s best players.

“She got a lot of confidence out of that experience,” he said. “She can say to herself: ‘hey I can play against some of the world’s best.’ She was able to perform at a really high level.”

McIntyre’s teammates have noticed a spike in the senior leader’s play as well.

“Mac has been a huge influence on me,” said fellow senior Hallie Enderle. “There are really no words to describe how hard she works. She is a fearless and amazing leader. I’m so lucky to be able to play with her.”

Meanwhile Olson called McIntyre one of the best players and people he has ever coached.

“She is so trustworthy and pure off the court and on the court. She’s just real and direct,” Olson said. “You don’t have to choose your words around her. She’s having a lot of fun in practice.”

Keeping fun at the top of her priority list is what helps McIntyre deal with the pressure that comes with leadership.

“I’m a pretty intense person but I’m goofy too,” she admitted. “A lot of times I just like to lie around and chill. I like oldies and 80’s rock.”

Oddly enough, McIntyre got a late start at the game that has earned her conference-wide fame.

“To be honest I never really liked volleyball until about seventh grade,” McIntyre said. “My mom forced me to go out in the sixth grade. I just started to fall in love with (Volleyball). I was really big into basketball before that.”

Her family and friends serve as the catalyst for McIntyre’s undying passion for success.

“My parents, grandparents and a lot of my close cousins have always pushed me and supported me,” she said. “I’ve always wanted to win at a young age. I just wanted to be the best at everything.”

By Andrew Mullin | 6 hours ago

By Barbara Garcia | 6 hours ago