Volleyball misses out on MAC Tournament despite victory against Ohio

Following Saturday's five-set win over Ohio in the final match of the season, Central Michigan head volleyball coach Mike Gawlik stressed that as satisfying as the win was, much work still needed to be done.

Prior to the Ohio match, Western Michigan's win against Toledo Saturday clinched the final spot in the Mid-American Conference tournament for the Broncos.

That meant CMU's match against Ohio would be their last of the season no matter the outcome.

"Satisfied? No. We aspire to be better than we are," Gawlik said. "Our goal was to make the MAC tournament and do some damage there."

Although his team had ways of finding out, Gawlik said he didn't mention WMU's victory because he didn't want it to be the focal point of his team's performance against the Bobcats. 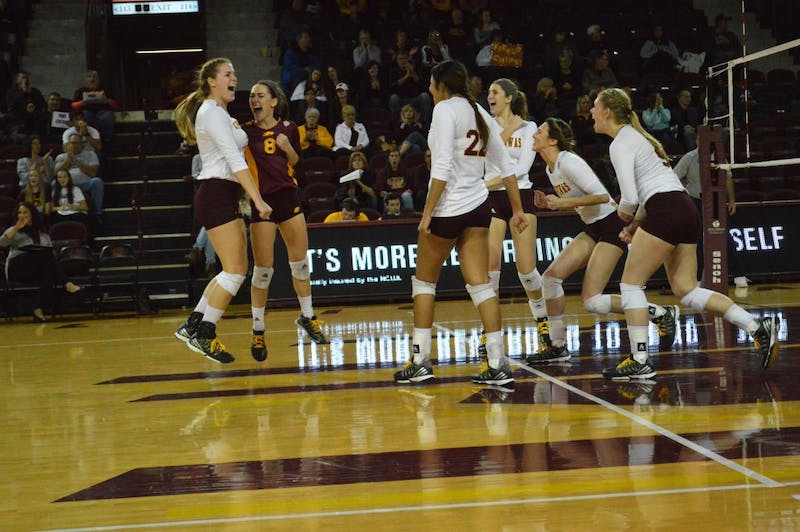 Prior to Saturday's matchup against Ohio, knowledge of Western Michigan's win over Toledo earlier in day was scarce among the Central Michigan Volleyball team.

The win meant that Western had officially clinched a spot in the Mid-American Conference tournament, a spot that CMU could've clinched with a win against Ohio and a Western loss.

"I didn't feel like there was any reason to tell them," he said. "Had (Western) won or lost, obviously it matters, but it shouldn't affect the way we needed to play which was the pivotal point for us in our match."

After dropping sets one and two, sophomore outside hitter Laura Wilson said her teammates picked themselves up during the intermission with a "nothing to lose" attitude. Western's victory had no effect on the Chippewas' ability to fight back in the last three sets.

"I knew, but i didn't let that affect how I play and I wasn't going to let that affect my teammates' play," she said. "I just wanted to pick everybody up and play our best."

With Saturday's win, Gawlik's first season as head coach ended with a 11-17 overall record and a 5-11 record in the MAC.

Senior setter Kathia Sanchez will be the only player who won't return next season due to graduation.

"Anytime you can beat a program that you respect that is at times one of the standards in the MAC conference, it gives you a lot of confidence moving forward," Gawlik said. "We've got a lot of players on this team that are returning for next year. The way we play is more important than sometimes the results of how it turns out on paper."

By Masha Smahliuk | 15 hours ago