Grand Rapids freshman Natalie Belsito peered out the window of her teammates' dorm room on March 27 and noticed a squirrel struggling to swim in The Market pond.

A video following Belsito as she rescued the squirrel from drowning on March 27 currently has 120 retweets and 824 likes on Twitter.

"I couldn't just leave it, you know?" Belsito said. 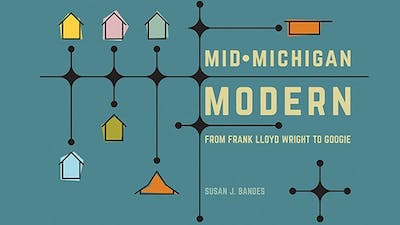 By Masha Smahliuk | 41 minutes ago 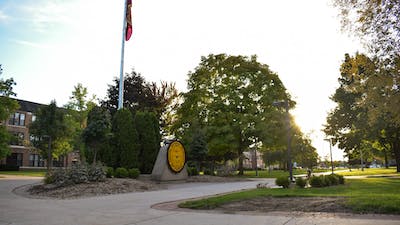 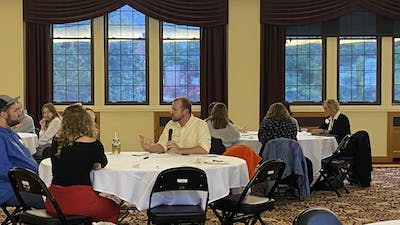 Belsito had just finished classes and went to hang out with Central Michigan University's women's soccer teammates Canada sophomore Taylor Zimmerman and Novi sophomore Megan Riley when another student came by to point out a squirrel struggling in The Market pond.

“It definitely was drowning because it was really slow when we saw it and it started to dip its head under the water" Belsito said. "I went down there with a hockey stick to try to pull it out, but that wasn’t really working."

She said a man walked by whose arm was long enough to pull the squirrel out by the tail, but he pulled it from the pond with such force the squirrel traveled through the air and hit the cement.

“If he would’ve placed it properly, it probably would have run away, but he smacked it on the ground," Riley said.

Belsito, who said she doesn't "really know CPR," tried performing it with the hockey stick, but soon discovered the tactic wouldn't work. Zimmerman returned to her dorm room to grab towels, allowing Belsito to perform CPR by hand.

“Honestly, when I was doing it, I was thinking of the episode of "The Office" when they do CPR," she said. "I was literally singing that song as I tried to do it.”

After an hour, the squirrel regained consciousness. Belsito said the squirrel was still cold and twitching, which resulted in the group deciding to wrap the animal in towels, place it a cardboard box and bring it to Belsito's dorm room.

“I brought it up to my room - secretively - because we’re not supposed to have any (animal) in there,” she said.

Riley defended her decision, saying, "You gotta do what you gotta do if you’re going to save a squirrel’s life.”

Belsito laid towels on bags of hot water in her shower and laid the squirrel on top.

"I figured the best way to get it warm and dry was with a hair dryer, just because that’s what I would do if my hair was cold," she said.

It took two hours warm the squirrel, but the method worked.

"He started to calm down and was breathing normally and wasn’t twitching anymore," Belsito said.

Once the animal was warm and dry, she left her bathroom to allow the squirrel to calm down completely.

In the meantime, the group answered Snapchats from the rest of their teammates who had seen the squirrel on their Snapchat stories and invited them to join the three in releasing it.

"I was not expecting him to be alive," Belsito said.

Zimmerman said the animal wasn't moving inside the cardboard box, even as they carried it outside to a pine tree near the residence hall. The group would be surprised.

"We opened it up and it sprung up and ran up the tree," Riley said.

Belsito said the experience and responses on social media have been positive.

“I mean, you basically brought a squirrel back from dying," Zimmerman said.

Unfortunately, there's only a small chance Belsito will recognize the squirrel she saved if she sees it again. There were no noticeable or significant markings on the animal that would indicate it was the squirrel she rescued.

“I was thinking about getting him a collar,” Belsito said, laughing.

By Ashley Birkeness | 21 hours ago