Even with all his responsibilities as a Central Michigan University police officer, Lt. Michael Sienkiewicz still finds time for his seasonal hobby, gardening.

Although it's a relatively new hobby, Sienkiewicz's passion for gardening shows. In his office, he proudly displays one of his home-grown pumpkins and a gourd. Sienkiewicz also regularly changes his desktop computer background to reflect the current state of his half-acre plot.

Sienkiewicz has been at the CMUPD for over 14 years. Last year, he started his master's degree in Science and Administration with a concentration in leadership. If that wasn't enough, raising a family fills in the rest of his schedule.

By Courtney Pedersen | 21 hours ago 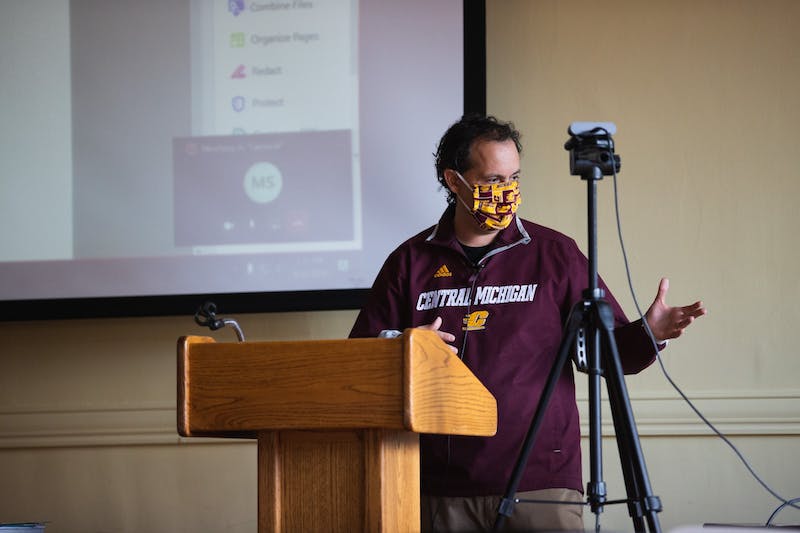 Central Michigan Life spoke with Sienkiewicz about his garden, and how he balances life as an officer, a student, a father and a farmer.

When did you start gardening?

I bought my house three years ago from another police officer (CMUPD officer David Block) who still works here, and I took over his garden. He got me started.

He had a garden with his family, and the first year I moved in, he taught me how to garden because I really didn’t know anything. I previously lived in town and didn’t know anything (about gardening). He helped the first year and got me going. Now, I've tweaked things. I’m a more techy guy, and it was way too much work hauling a hose around the garden. I modernized it a bit and automated the garden with drip irrigation and a timer so it waters itself.

How did you get into selling pumpkins?

(Dave Block) grew and sold pumpkins before me, so a lot of people out in that area would already stop by and pick up pumpkins every year. I just continued that. I have a self-service stand where people come up and leave money in the box (we hope!). At least I think most people do. It's $3-4 for a pumpkin.

In addition to pumpkins, what do you grow?

I grow all kinds of crazy gourds: long ones, birdhouse gourds, speckled swan gourds. I grow (what I call) Cinderella pumpkins, white pumpkins, Howden pumpkins - (they're all) really cool... before they get all moldy. I also grow corn, sweetcorn, green beans, tomatoes, squash, cucumbers, zucchini and all kinds of stuff throughout the year.

What goes into the upkeep of your garden?

In the spring, putting the garden in takes about a 40-hour week worth of work, just getting stuff into the ground. I got a tractor over the winter so that made life a lot easier this year. It was really hard (before the tractor). I had a little push tiller and Dave did it all with a tiller... I don’t know how he did it.

Who helps you with the garden?

Dave did the first year, but (mainly) my wife and my three boys. From oldest to youngest, they're 13, 11 and 6 years old. We get out there, and they reluctantly help out in the garden. Harvest is fun, so they don’t mind doing that, but when you gotta (regularly) keep the weeds down… (the boys) are not as excited.

You seem really passionate about your garden - why?

It’s my hobby. I do a lot of work here at my desk during the day. It’s nice to go home and do something. I like to make stuff. It’s cool to watch the little seed turn into something, all the crazy stuff that comes out of a little seed. The first year, I just went to the store and bought a pack of large gourd seed mix. I didn’t know what was going to come out and these crazy things started popping out of the ground.

It’s an opportunity to de-stress.

How do you balance your work with your hobby?

Last summer I started my master’s degree here at CMU, and I didn’t have a tractor. I was taking classes and working and trying to do my garden, and it didn’t work out that well. The weeds took over... This year, I bought a tractor, and it made life a lot easier.

I’d be reading books at night when I should have been out in the garden or vice versa. I just started my classes last summer. It didn’t work out well. I just saw my academic adviser last spring and she goes, "how did your garden go?" She saw the look of defeat in my eyes. I said, “it didn’t go well.” She gave me the permission to take my summer off, because she said it’s important (to have something like that).

I’m not doing it to make a bunch of money - (gardening is) something I like doing, and I use it to teach to the boys the value of hard work.

By Katherine Schultz | 18 hours ago