Michigan residents, including Central Michigan University students, are weighing their opinions on reproductive freedoms after the Supreme Court overturned Roe v. Wade, the 1973 ruling which upheld the right to get an abortion, on June 24.

Months later, on Sept. 7, a Michigan judge shot down a 1931 anti-abortion law from being enforced, leading it to become a topic of the Nov. 8 ballot as Proposal 22-3.

Now, enforcing abortion laws is left up to individual states.

‘That's why we do this work’: CMU students pack first stop of “Michigan Made College Tour”

In Michigan's 1931 anti-abortion law, the only way to get an abortion would be if the mother's life is endangered by the pregnancy.

“A law denying safe, routine medical care not only denies women of their ability to control their bodies and their lives,” Gleicher's decision said. “It denies them of their dignity, but Michigan’s Constitution also forbids this violation of due process.”

Gleicher's decision said she believes the law prohibits a woman from determining the future of their life by forcing them into motherhood.

Governor Gretchen Whitmer has been vocal in her support of abortion rights. On April 7, Whitmer wrote an op-ed in the Detroit Free Press highlighting that seven out of 10 Michiganders support abortion. 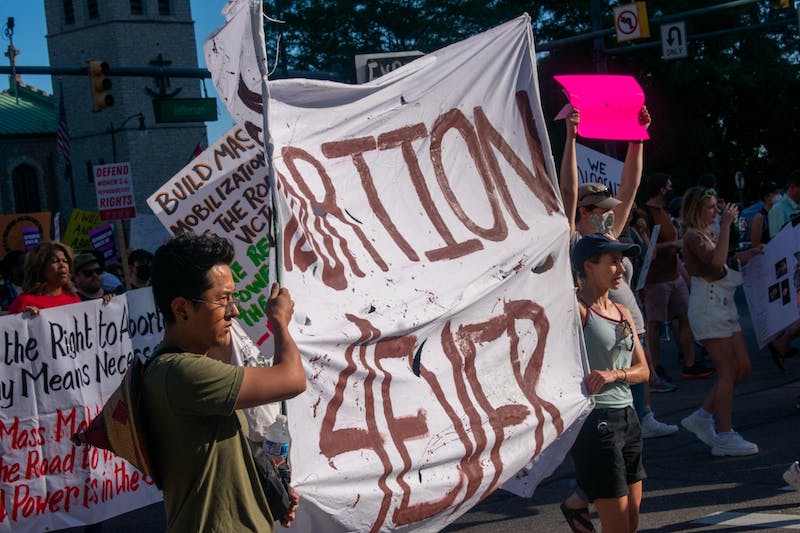 The national debate on abortion has sparked both outrage and support.

According to the Center of Reproductive Rights (CRR), 10 states, including California, New York and Illinois, have expanded abortion access due to previous laws created to protect reproductive rights. This means the right to have an abortion is protected by state statutes and their constitutions, and they have other laws and policies that create additional abortion care.

According to the CRR, 11 states protect abortion, including Alaska, Florida and Maine, meaning they have the right to abortion but may have limitations set for access to care.

The Michigan Supreme Court has decided to allow citizens to vote for reproductive freedom as a proposal on the November midterm election ballot. A "yes" vote would make abortion a protected right in Michigan's constitution, while a "no" vote would not add any protections.

The national debate on abortion has reached CMU students as well.

Vice President of the CMU College Republicans Evan Gibeau said abortion should be a choice for everyone.

“I don't think my opinion really matters in the grand scheme of things, and I don't think the government should either,” Gibeau said. “It should be a choice that everybody has, whether you like it or not, because there are too many circumstances in which I think an abortion would be warranted, and they sort of outweigh the instances in which (it) wouldn’t.”

President of the CMU College Democrats Lauren Hull said although the decision of getting an abortion is a tough one to make, it should be an option that every woman has. She said it is a personal decision that the government should have no business in.

"I think before, abortion was something that we could think about theoretically, and we have these moral debates and you are on one side or the other." Hull said. "Now what we're looking at is this extreme 1931 law that is going to be reality. Very shortly. And so we're in a position where we just can't afford to sit in the abstract and have these moral debates anymore."

Macomb junior Ethan Alwardt said abortion should be legal in Michigan and women should have the right to choose.

“The government should not have a say in the matter,” he said. “I don’t think it should even be voted on. It is a human right, but since there is the potential of it being taken away, then (by voting) people can speak (up) and protect women’s rights.”

Macomb senior Hailey Ryan said abortion is an important topic for those who can give birth. While it may seem like a scary subject she said, it needs to be discussed.

“Women’s rights and movements (have gotten) us so far," Ryan said. "From voting, to owning our own land, running our own businesses and being functioning members of society, these rights are slowly being stripped away, starting with abortion.

"These rights are under attack, and we reserve the right to use our voice and our civic duty of voting to speak our minds and fight for our rights."

By Megan Youngblood | 21 hours ago