When Central Michigan was last in the Mid-American Conference championship game, most of the players on the current roster were either in middle or elementary school.

Coach Jim McElwain was the offensive coordinator at Alabama under Nick Saban and had yet to own a head coaching gig. 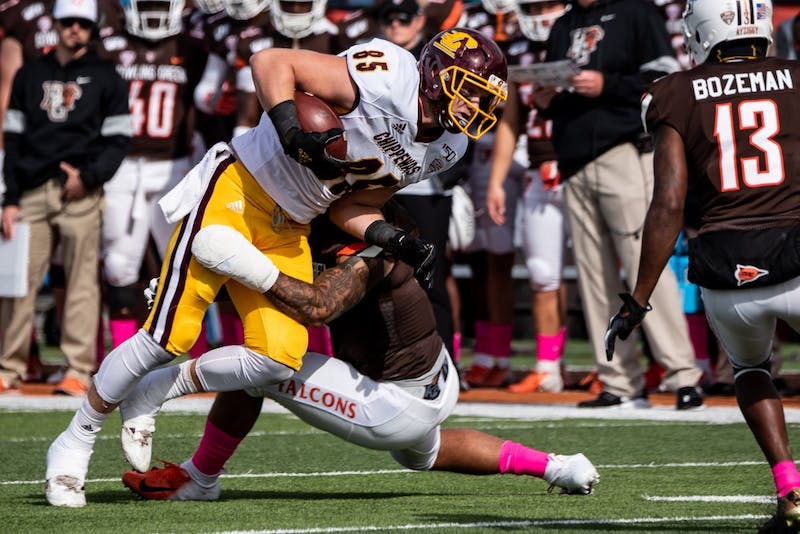 Simply put, it's been a while.

Ten years later, the Chippewas return to Ford Field to face Miami (Ohio) for a conference title in one of the biggest turnarounds in college football coming off of their 1-11 season in 2018.

Oddly enough, in 2009, Miami had a 1-11 season and turned it around the following season similarly to CMU.

In 2010, the RedHawks won the MAC East Division by going 7-1 in conference play, won the conference title game and won their bowl game to finish 10-4.

A difference between that instance and CMU's case with McElwain in his first year in Mount Pleasant, was Michael Haywood took the helm of the program in 2009 then led the turnaround the following year.

Another difference is the RedHawks lone win in the 2009 season came against a MAC opponent -- Toledo. Whereas Central's was against Maine -- an opponent in the Football Championship Subdivision.

One of the other parallels between 2009 and now was the fact the Chippewas defeated Toledo. The Rockets had controlled the series for the previous nine seasons before CMU defeated them on Nov. 29 to clinch the MAC West Division.

It is important to note, CMU earned a share of the MAC West Division title in 2017 but did not advance to Ford Field as Toledo owned the tiebreaker that season.

CMU and Miami have faced off once in the MAC title game, a 35-10 win for the Chippewas in 2007. Quarterback Dan LeFevour threw for 185 yards and rushed for 170 more.

Coming off their last showing in the 2015 Quick Lane Bowl, the Chippewas are 4-4 all-time at Ford Field. The team has made five bowl game appearances at the home of the NFL's Detroit Lions.

Each of the first two times CMU won the conference title, the team played in the Motor City Bowl again in Ford Field, just a few weeks after winning the conference.

McElwain said he had not been to Ford Field before the MAC Media Day in July, but he said he liked the conference held its media day at the same venue as the championship game.

With the game inching closer, McElwain said his team is ready for the opportunity to play in a professional stadium.

"The excitement and the emotions, that's natural," McElwain said. "I think we'll have to dial it back a little bit and get on a normal routine as we go into the game. But for so many kids in our program, they grew up watching the Lions.

"I just think it's great that our kids are going to get an opportunity to play there."

Central Michigan's offense has been able to move the ball on almost every team it has faced this year.

After missing four games with a knee injury, senior graduate transfer quarterback Quinten Dormady has completed 67% of his passes for 1,916 yards and 13 touchdowns against five interceptions.

While the passing game has boosted the Chippewa offense, the rushing attack has been the key piece the team has needed to move the ball. With three guys mainly carrying the ball, it is easy to see why it has been as prolific as it has this year.

Senior running back Jonathan Ward hit the 1,000-yard mark in the season finale against Toledo. Despite missing two games due to a shoulder injury, Ward has rushed for 1,056 yards and 15 touchdowns.

His counterpart, junior back Kobe Lewis, filled in for the senior in those two games nicely. Lewis, too, is almost at 1,000 yards on the year as he has netted 953 yards and scored 11 times.

Lastly, senior quarterback Tommy Lazzaro has found a rejuvenation with the run package McElwain and Frye set up for him in short yardage and red zone opportunities for the Chippewas. Appearing in 11 games, Lazzaro has 108 yards and six touchdowns but has kept more than a handful of drives alive with his legs.

Looking at the RedHawks offensively, they do not move the ball as effectively as the Chippewas.

On the ground, Miami has totaled 1,654 yards and scored 19 touchdowns in the regular season. In the passing game, the team finished with 2,051 yards and just 10 touchdowns against 10 interceptions.

On average, Miami gains 5 yards per play and 308.8 yards per game, which is second-to-last in the conference.

Combined, the RedHawks have amassed 3,705 yards of total offense and 29 touchdowns.

On the individual front, junior running back Jaylon Bester is the lead guy for the RedHawks with 623 yards and 11 touchdowns in nine appearances this year. Tyre Shelton is the secondary back with 494 yards and two scores in 12 games this year.

Under center, Miami has freshman Brett Gabbert, who was injured in the second half of Miami's regular season finale against Ball State.

Gabbert, the younger brother of NFL quarterback Blaine Gabbert, will play in the game after sitting out in the second half of the game for precautionary reasons.

After making appearances in all 12 regular season games, Gabbert completed 53% of his passes for 1,967 yards and 10 touchdowns.

Sophomore defensive back Sterling Weatherford and junior linebacker Ryan McWood are two of the RedHawks' top defenders as they each lead the team with 86 tackles apiece. Weatherford has 5.5 tackles for loss and two sacks to give him the slight edge.

Senior Travion Banks and junior Mike Brown are the two to keep an eye out for in the RedHawk secondary. Banks leads the defense with four interceptions while Brown trails his teammate by just one.

Central Michigan's defense is one of the top in the conference as it ranks in the top 5 in almost every defensive category in the conference. Passing yards allowed (240.0) has the Chippewas ranked No. 10 in the MAC.

Michael Oliver, a senior linebacker, is second on the team with 73 total tackles, behind Brown's 78.

Oliver said after the Toledo game the defensive power CMU has turned into this year is a force to be reckoned with in the conference.

"You're not going to run the ball on the Chippewa defense like that," Oliver said. "That's just that."